The Complete Poetry and Essential Prose of John Milton (Hardcover) 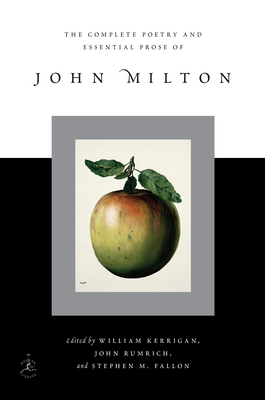 The Complete Poetry and Essential Prose of John Milton (Hardcover)


Special Order—Subject to Availability
John Milton is, next to William Shakespeare, the most influential English poet, a writer whose work spans an incredible breadth of forms and subject matter. The Complete Poetry and Essential Prose of John Milton celebrates this author’s genius in a thoughtfully assembled book that provides new modern-spelling versions of Milton’s texts, expert commentary, and a wealth of other features that will please even the most dedicated students of Milton’s canon. Edited by a trio of esteemed scholars, this volume is the definitive Milton for our time.

In these pages you will find all of Milton’s verse, from masterpieces such as Paradise Lost–widely viewed as the finest epic poem in the English language–to shorter works such as the Nativity Ode, Lycidas,, A Masque and Samson Agonistes. Milton’s non-English language sonnets, verses, and elegies are accompanied by fresh translations by Gordon Braden. Among the newly edited and authoritatively annotated prose selections are letters, pamphlets, political tracts, essays such as Of Education and Areopagitica, and a generous portion of his heretical Christian Doctrine. These works reveal Milton’s passionate advocacy of controversial positions during the English Civil War and the Commonwealth and Restoration periods.

With his deep learning and the sensual immediacy of his language, Milton creates for us a unique bridge to the cultures of classical antiquity and medieval and Renaissance Christianity. With this in mind, the editors give careful attention to preserving the vibrant energy of Milton’s verse and prose, while making the relatively unfamiliar aspects of his writing accessible to modern readers. Notes identify the old meanings and roots of English words, illuminate historical contexts–including classical and biblical allusions–and offer concise accounts of the author’s philosophical and political assumptions. This edition is a consummate work of modern literary scholarship.

Praise
“Over the coming months, [John Milton’s] 400th anniversary will be celebrated in many different ways, but it is highly unlikely that any of the tributes he receives will do as much for him as the appearance of the Modern Library edition of his collected poetry and selected prose. The edition is a model of its kind, well designed and attractively produced. There are scholarly but unintimidating footnotes and helpful introductions to the major works. Spelling and punctuation have been modernized -- a difficult decision but the right one….A great deal has been packed in, but Milton has still been left room to breathe. The whole enterprise is meant to be reader-friendly, and it succeeds.” — The Wall Street Journal

“This magnificent edition gives us everything we need to read Milton intelligently and with fresh perception. You could take it to a desert island, or just stay home and further your education in a great writer.”
–William H. Pritchard, Amherst College

“For generations of readers Milton has been the measure of both eloquence and nobility of mind. For the next generation this new Modern Library volume will be the standard: it is meticulously edited, full of tactful annotations that set the stage for his work and his times, and it brings Milton, as a poet and a thinker, vividly alive before us.”
–Robert Hass

“Years ago I began a series of poems about Milton and his daughters. Ever since, I have been combing through Milton’s poems and prose for those moments when the poet would turn and speak to the poet in me. It is in the new Kerrigan-Rumrich-Fallon edition that I now find prompt rejoinders to questions, ready clarifications of problems, and a more intimate dimension of that formidable adjective Miltonic.”
–Richard Howard

“A superb edition of the great poet, with modernized spelling, lucid introductions to each work, illuminating footnotes, and fresh prose translations of poems in Latin, Greek, and Italian. This will surely be the edition of choice for teachers, students, and general readers too.”
–Leo Damrosch, Harvard University

“The introductions alone constitute a fine new book on Milton, beautifully written, challenging and balanced, with equal care and insight given to textual, biographical, historical, literary-historical and literary-critical concerns. It is a book to last a lifetime.”
–James Earl, University of Oregon

“In this landmark edition, teachers will discover a powerful ally in bringing the excitement of Milton’s poetry and prose to new generations of students. In the clarity of its overall conception, its thoroughness, and its never-faltering attention to literary and historical detail, the Modern Library Milton serves almost as another teacher–patient, thoughtful, endlessly concerned with genuine comprehension.”
–William C. Dowling, Rutgers University

“The editors display a remarkable combination of scholarly rigor and sensitivity to literary values, expressed in prose of exemplary clarity and extraordinary grace; even the notes, concise as well as precise, approach a kind of epigrammatic brilliance. A superb edition.”
–Edward W. Tayler, Columbia University

“The editors succeed gloriously, meeting the needs of the whole spectrum, from general readers to advanced students. A modernized text, one sensitive to Milton’ s poetic rhythm, illuminates both the author’s meaning and artistry. It’s a beautiful edition–a home worthy of its subject.”
–Marina Favila, James Madison University
John Milton (1608-74), the great English poet, is best known for his epic masterpiece, Paradise Lost. In addition to writing brilliant verse and overtly political works, Milton was also a private tutor and, during the Commonwealth period, served as Secretary for Foreign Tongues, a position mostly involving the composition of the English Republic’s foreign correspondence in Latin.

About the Editors
William Kerrigan is the author of many books, including The Sacred Complex: On the Psychogenesis of Paradise Lost, for which he won the James Holly Hanford Award of the Milton Society of America. A former president of the Milton Society, he has also earned numerous honors and distinctions from that group, including its award for lifetime achievement. He is professor emeritus at the University of Massachusetts.

John Rumrich is the author of Matter of Glory: A New Preface to Paradise Lost and Milton Unbound: Controversy and Reinterpretation. An award-winning editor and writer, he is Thaman Professor of English at the University of Texas at Austin, where he teaches early modern British literature.

Stephen M. Fallon is the author of Milton’s Peculiar Grace: Self-Representation and Authority and Milton Among the Philosophers: Poetry and Materialism in Seventeenth-Century England, winner of the Milton Society’s Hanford Award. He is professor of liberal studies and English at the University of Notre Dame.