Catherine the Great: Portrait of a Woman (Hardcover) 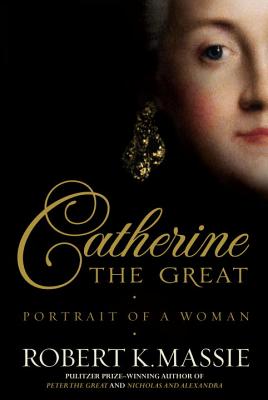 Catherine the Great: Portrait of a Woman (Hardcover)

“This is an admiring biography of the minor German princess who, through cleverness, audacity, and ambition, deposed her incompetent husband, a grandson of Peter the Great, to become Empress of Russia. An 'enlightened' autocrat, Catherine did not succeed at all she attempted, but Massie argues persuasively that she truly earned the title bestowed upon her by the Russian people. What a woman, what a book!”
— Arlene Cook, Watermark Book Co., Anacortes, WA

The Pulitzer Prize–winning author of Peter the Great, Nicholas and Alexandra, and The Romanovs returns with another masterpiece of narrative biography, the extraordinary story of an obscure young German princess who traveled to Russia at fourteen and rose to become one of the most remarkable, powerful, and captivating women in history.

Born into a minor noble family, Catherine transformed herself into Empress of Russia by sheer determination. Possessing a brilliant mind and an insatiable curiosity as a young woman, she devoured the works of Enlightenment philosophers and, when she reached the throne, attempted to use their principles to guide her rule of the vast and backward Russian empire. She knew or corresponded with the preeminent historical figures of her time: Voltaire, Diderot, Frederick the Great, Empress Maria Theresa of Austria, Marie Antoinette, and, surprisingly, the American naval hero, John Paul Jones.

Reaching the throne fired by Enlightenment philosophy and determined to become the embodiment of the “benevolent despot” idealized by Montesquieu, she found herself always contending with the deeply ingrained realities of Russian life, including serfdom. She persevered, and for thirty-four years the government, foreign policy, cultural development, and welfare of the Russian people were in her hands. She dealt with domestic rebellion, foreign wars, and the tidal wave of political change and violence churned up by the French Revolution that swept across Europe. Her reputation depended entirely on the perspective of the speaker. She was praised by Voltaire as the equal of the greatest of classical philosophers; she was condemned by her enemies, mostly foreign, as “the Messalina of the north.”

Catherine’s family, friends, ministers, generals, lovers, and enemies—all are here, vividly described. These included her ambitious, perpetually scheming mother; her weak, bullying husband, Peter (who left her lying untouched beside him for nine years after their marriage); her unhappy son and heir, Paul; her beloved grandchildren; and her “favorites”—the parade of young men from whom she sought companionship and the recapture of youth as well as sex. Here, too, is the giant figure of Gregory Potemkin, her most significant lover and possible husband, with whom she shared a passionate correspondence of love and separation, followed by seventeen years of unparalleled mutual achievement.

The story is superbly told. All the special qualities that Robert K. Massie brought to Nicholas and Alexandra and Peter the Great are present here: historical accuracy, depth of understanding, felicity of style, mastery of detail, ability to shatter myth, and a rare genius for finding and expressing the human drama in extraordinary lives.

History offers few stories richer in drama than that of Catherine the Great. In this book, this eternally fascinating woman is returned to life.
Robert K. Massie was born in Lexington, Kentucky, and studied American history at Yale and European history at Oxford, which he attended as a Rhodes Scholar. He was president of the Authors Guild from 1987 to 1991. His previous books include Nicholas and Alexandra, Peter the Great: His Life and World (for which he won a Pulitzer Prize for biography), The Romanovs: The Final Chapter, Dreadnought: Britain, Germany, and the Coming of the Great War, and Castles of Steel: Britain, Germany, and the Winning of the Great War at Sea.
PRAISE FOR CATHERINE THE GREAT

“What Catherine the Great offers is a great story in the hands of a master storyteller.”—The Wall Street Journal

“What a woman, what a world, what a biography.” —USA Today

“[Massie] hasn’t lost his mojo. . . . a consistently nimble and buoyant performances . . . [Massie] has always been a biographer with the instincts of a novelist. He understands plot—fate—as a function of character, and the narrative perspective he establishes and maintains, a vision tightly aligned with that of his subject, convinces a reader he’s not so much looking at Catherine the Great as he is out of her eyes. . . juicy and suspenseful.” — Kathryn Harrison, The New York Times Book Review

“What a Woman!” —Elle magazine

“In Catherine the Great, Massie has created a sensitive and compelling portrait not just of a Russian titan, but also of a flesh-and-blood woman.”—Newsweek

“[A] meticulously detailed work about Catherine and her world…Massie makes Catherine’s story as gripping as that of any novel. His book does full justice to a complex and fascinating woman and to the age in which she lived.” — Historical Novels Review