The Myth of Artificial Intelligence: Why Computers Can't Think the Way We Do (Paperback) 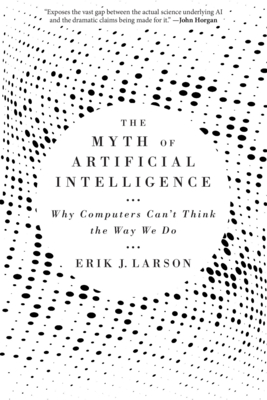 The Myth of Artificial Intelligence: Why Computers Can't Think the Way We Do (Paperback)

"Exposes the vast gap between the actual science underlying AI and the dramatic claims being made for it."
--John Horgan

"If you want to know about AI, read this book...It shows how a supposedly futuristic reverence for Artificial Intelligence retards progress when it denigrates our most irreplaceable resource for any future progress: our own human intelligence."
--Peter Thiel Ever since Alan Turing, AI enthusiasts have equated artificial intelligence with human intelligence. A computer scientist working at the forefront of natural language processing, Erik Larson takes us on a tour of the landscape of AI to reveal why this is a profound mistake. AI works on inductive reasoning, crunching data sets to predict outcomes. But humans don't correlate data sets. We make conjectures, informed by context and experience. And we haven't a clue how to program that kind of intuitive reasoning, which lies at the heart of common sense. Futurists insist AI will soon eclipse the capacities of the most gifted mind, but Larson shows how far we are from superintelligence--and what it would take to get there. "Larson worries that we're making two mistakes at once, defining human intelligence down while overestimating what AI is likely to achieve...Another concern is learned passivity: our tendency to assume that AI will solve problems and our failure, as a result, to cultivate human ingenuity."
--David A. Shaywitz, Wall Street Journal "A convincing case that artificial general intelligence--machine-based intelligence that matches our own--is beyond the capacity of algorithmic machine learning because there is a mismatch between how humans and machines know what they know."
--Sue Halpern, New York Review of Books