The Injustice Never Leaves You: Anti-Mexican Violence in Texas (Paperback) 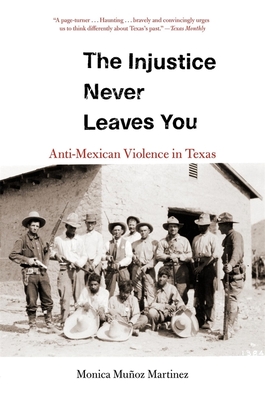 The Injustice Never Leaves You: Anti-Mexican Violence in Texas (Paperback)

"A page-turner...Haunting...Bravely and convincingly urges us to think differently about Texas's past."
--Texas Monthly Between 1910 and 1920, self-appointed protectors of the Texas-Mexico border--including members of the famed Texas Rangers--murdered hundreds of ethnic Mexicans living in Texas, many of whom were American citizens. Operating in remote rural areas, officers and vigilantes knew they could hang, shoot, burn, and beat victims to death without scrutiny. A culture of impunity prevailed. The abuses were so pervasive that in 1919 the Texas legislature investigated the charges and uncovered a clear pattern of state crime. Records of the proceedings were soon filed away as the Ranger myth flourished. A groundbreaking work of historical reconstruction, The Injustice Never Leaves You has upended Texas's sense of its own history. A timely reminder of the dark side of American justice, it is a riveting story of race, power, and prejudice on the border. "It's an apt moment for this book's hard lessons...to go mainstream."
--Texas Observer "A reminder that government brutality on the border is nothing new."
--Los Angeles Review of Books