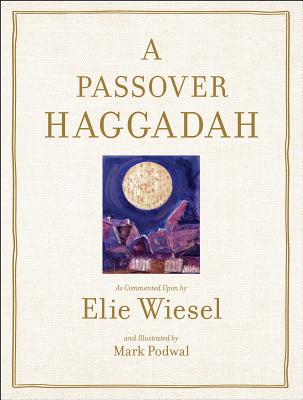 
Not On Our Shelves—Ships in 1-5 Days
With this Passover Haggadah, Elie Wiesel and his friend Mark Podwal invite you to join them for the Passover Seder -- the most festive event of the Jewish calendar. Read each year at the Seder table, the Haggadah recounts the miraculous tale of the liberation of the Children of Israel from slavery in Egypt, with a celebration of prayer, ritual, and song. Wiesel and Podwal guide you through the Haggadah and share their understanding and faith in a special illustrated edition that will be treasured for years to come.
Accompanying the traditional Haggadah text (which appears here in an accessible new translation) are Elie Wiesel's poetic interpretations, reminiscences, and instructive retellings of ancient legends. The Nobel laureate interweaves past and present as the symbolism of the Seder is explored. Wiesel's commentaries may be read aloud in their entirety or selected passages may be read each year to illuminate the timeless message of this beloved book of redemption.
This volume is enhanced by more than fifty original drawings by Mark Podwal, the artist whom Cynthia Ozick has called a "genius of metaphor through line." Podwal's work not only complements the traditional Haggadah text, as well as Wiesel's poetic voice, but also serves as commentary unto itself. The drawings, with their fresh juxtapositions of insight and revelation, are an innovative contribution to the long tradition of Haggadah illustration.
Elie Wiesel was the author of more than forty books, including his unforgettable international bestsellers Night and A Beggar in Jerusalem, winner of the Prix Médicis. He was awarded the Presidential Medal of Freedom, the United States Congressional Gold Medal, and the French Legion of Honor with the rank of Grand Cross. In 1986, he received the Nobel Peace Prize. He was the Andrew W. Mellon Professor in the Humanities and University Professor at Boston University for forty years. Wiesel died in 2016.