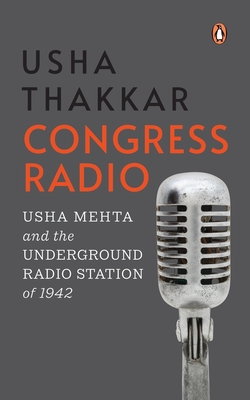 
Special Order—Subject to Availability
This book on the Congress Radio of 1942 is a thrilling and moving account of how a daring underground operation was conceived and carried out, and of how it was busted by the colonial police. It is meticulously researched, drawing on a wide range of primary sources. At the centre of the story is the remarkable figure of Usha Mehta, a slight, slender, twenty-two-year-old freedom fighter of exemplary courage and resolution. The book deserves a wide readership, within and beyond the academy.

USHA THAKKAR is President, Mani Bhavan Gandhi Sangrahalaya, Mumbai. She retired as Professor and Head, Department of Political Science, SNDT Women's University, Mumbai. She has done her postdoctoral research at the University of Chicago on a Fulbright Fellowship; at Cornell University on a Senior Fulbright Fellowship; and at York University on a WID Fellowship from the Shastri Indo-Canadian Institute. She was also a visiting fellow at Sheffield City Polytechnic, UK. The Asiatic Society of Mumbai has conferred an honorary fellowship on her. She has been vice-president, Asiatic Society of Mumbai, and also of Banasthali Vidyapith, Rajasthan.


Her research areas include Gandhian Studies, Women's Studies, and Indian Politics. Her publications (authored/co-authored/co-edited) include Gandhi in Bombay: Towards Swaraj; Understanding Gandhi: Gandhians in Conversation with Fred J. Blum; William Erskine; Women in Indian Society; Zero Point Bombay: In and Around Horniman Circle; Culture and the Making of Identity in Contemporary India;
Pushpanjali: Essays on Gandhian themes in honour of Dr. Usha Mehta; and Ghunghat Ka Pat Khol (a collection of short stories by women writers in Gujarati). She has contributed to many prestigious journals and has also presented papers at many national and international conferences.