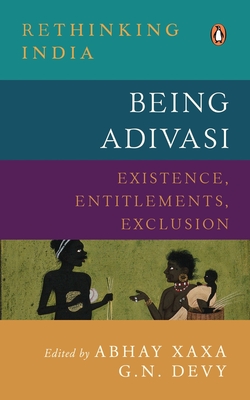 The seventh volume in the ambitious Rethinking India series, Being Adivasi: Existence, Entitlements, Exclusion looks at the process of development and how it clashes with the rights of the Adivasis. The volume serves not as an academic exercise but, in addressing the larger readership, as a prelude to the change that will bring to the Adivasis some measure of their rights as citizens of a democratic country. The essays in the volume address the persistent problems faced by the Adivasis and Denotified Tribes, from questions of their distinct identity to land alienation, indebtedness and displacement from ancestral lands.
Persistent problems faced by the Adivasis-land alienation, indebtedness, vanishing minor forest products from government forests and displacement from their ancestral lands-led to their impoverishment. The Panchayats (Extension to the Scheduled Areas) Act and the Forest Land Rights Act (FRA) enacted by the previous governments were decisive steps towards the empowerment of the Adivasis. However, at present, the implementation of these provisions has taken a back seat. This volume of the Rethinking India series presents the views of the Adivasis and the Denotified Communities on the process of development and its clash with their rights.

Abhay Xaxa was an adivasi rights activist and sociologist by training. He was also the National Convenor at National Campaign on Adivasi Rights. Ganesh N Devy is a thinker, cultural activist and an institution builder best known for the People's Linguistic Survey of India and the Adivasi Academy created by him.