The Wars of the Roses: The Fall of the Plantagenets and the Rise of the Tudors (Hardcover) 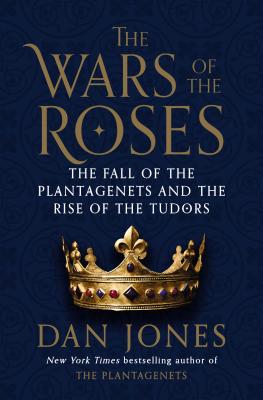 The Wars of the Roses: The Fall of the Plantagenets and the Rise of the Tudors (Hardcover)


Special Order—Subject to Availability
The author of the New York Times bestseller The Plantagenets and Magna Cartachronicles the next chapter in British history the historical backdrop for Game of Thrones
The inspiration for the Channel 5 series Britain's Bloody Crown
The crown of England changed hands five times over the course of the fifteenth century, as two branches of the Plantagenet dynasty fought to the death for the right to rule. In this riveting follow-up toThe Plantagenets, celebrated historian Dan Jones describes how the longest-reigning British royal family tore itself apart until it was finally replaced by the Tudors.
Some of the greatest heroes and villains of history were thrown together in these turbulent times, from Joan of Arc to Henry V, whose victory at Agincourt marked the high point of the medieval monarchy, and Richard III, who murdered his own nephews in a desperate bid to secure his stolen crown. This was a period when headstrong queens and consorts seized power and bent men to their will. With vivid descriptions of the battles of Towton and Bosworth, where the last Plantagenet king was slain, this dramatic narrative history revels in bedlam and intrigue. It also offers a long-overdue corrective to Tudor propaganda, dismantling their self-serving account of what they called the Wars of the Roses.
Dan Jonesis the author ofThe Plantagenets: The Warrior Kings and Queen Who Made England, a #1 international bestseller and New York Times bestseller, andWars of the Roses, which charts the story of the fall of the Plantagenet dynasty and the improbable rise of the Tudors. He writes and presents the popular Netflix series Secrets of Great British Castles.He is also the author ofMagna Carta: The Birth of LibertyandSummer of Blood: England s First Revolution andis working on a history of the Knights Templar due out in 2017."