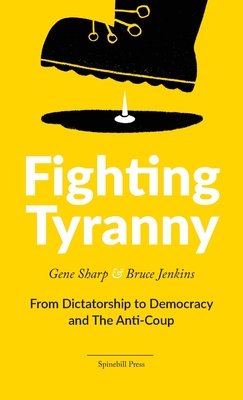 Fighting Tyranny combines two of Gene Sharp's books in a single pocket-sized volume - From Dictatorship to Democracy and The Anti-Coup. At a time when governments around the world are becoming increasingly authoritarian and aggressive towards their citizens, this book offers ideas and nonviolent methods of action to defend or establish democratic systems.

From Dictatorship to Democracy - A conceptual Framework for Liberation is a practical exploration of the techniques of nonviolent struggle against totalitarian regimes. This book has been used successfully by activists from all sides of the political spectrum, by grassroots activists and state-backed colour revolutionaries alike, to overthrow governments and effect political change.

The Anti-Coup - co-authored with Bruce Jenkins - examines the possibilities of nonviolent defence against coups d' tat. Coups may happen to a functioning democracy, or in the power vacuum that occurs after a government has been ousted. The Anti-Coup describes methods to block coups and putsch attempts which can be used by citizens and governments.