Riding The Iron Rooster: By Train Through China (Paperback) 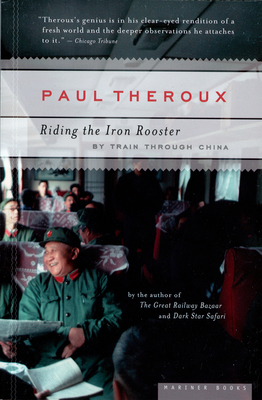 Riding The Iron Rooster: By Train Through China (Paperback)

Paul Theroux, the author of the train travel classics The Great Railway Bazaar and The Old Patagonian Express, takes to the rails once again in this account of his epic journey through China. He hops aboard as part of a tour group in London and sets out for China's border. He then spends a year traversing the country, where he pieces together a fascinating snapshot of a unique moment in history. From the barren deserts of Xinjiang to the ice forests of Manchuria, from the dense metropolises of Shanghai, Beijing, and Canton to the dry hills of Tibet, Theroux offers an unforgettable portrait of a magnificent land and an extraordinary people.

PAUL THEROUX is the author of many highly acclaimed books. His novels include The Lower River, Jungle Lovers, and The Mosquito Coast, and his renowned travel books include Ghost Train to the Eastern Star and Dark Star Safari. He lives in Hawaii and on Cape Cod.

"[Theroux's] books have enriched the travel literature of this century...China, with its guard down, its buttons undone, and its fingers greasy, looks even more magical with a little of its mystery revealed." USA Today

"[A] very funny, beautifully written, wonderfully observant, and deeply insightful description of the vagaries of life and politics in China." -- Conde Nast Traveler

"Fascinating...the portrait that emerges is a luminous, almost uncanny, and situationally accurate one. Theroux is particularly good at catching the surreal quality of China." The Miami Herald

"Theroux's genius is in his clear-eyed rendition of a fresh world and the deeper observations he attaches to it." The Chicago Tribune —