The Treason Of Isengard (History of Middle-earth #7) (Paperback) 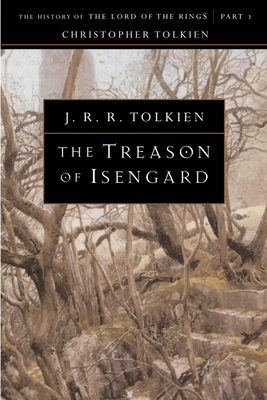 The Treason Of Isengard (History of Middle-earth #7) (Paperback)

This is book number 7 in the History of Middle-earth series.

The second part of The History of The Lord of the Rings, J.R.R. Tolkien's The Treason Of Isengard enthralling account of the writing of the Book of the Century which contains many additional scenes and includes the unpublished Epilogue in its entirety.

The Treason of Isengard continues the account of the creation of The Lord of the Rings started in the earlier volume, The Return of the Shadow.

It races the great expansion of the tale into new lands and peoples south and east of the Misty Mountains: the emerence of Lothlorien, of Ents, of the Riders of Rohan, and of Saruman the White in the fortress of Isengard.

In brief outlines and pencilled drafts dashed down on scraps of paper are seen the first entry of Galadriel, the earliest ideas of the history of Gondor, and the original meeting of Aragorn and Eowyn, its significance destined to be wholly transformed.

The book also contains a full account of the original map which was to be the basis of the emerging geography of Middle-earth.