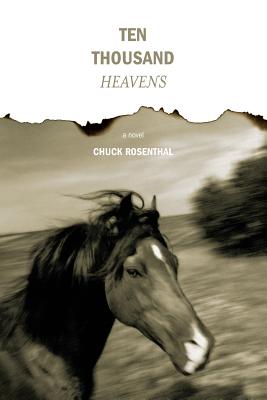 
Not On Our Shelves—Ships in 1-5 Days
(This book cannot be returned.)
With patience, persistence and love, a man called Bird befriends Annie, an abused and difficult mare. Eventually, Annie reciprocates Bird's affection, but their relationship is sorely tested when they are separated by a catastrophic wildfire. In order to reunite, they must battle not only the forces of nature but the greed and cunning of unscrupulous men.
Chuck Rosenthal was born in Erie, Pennsylvania; he moved to northern California in 1978 and has lived in Los Angeles since 1986. In 1994, at the age of 43, he began riding horses, and he purchased his first horse, Jackie O, an Arabian Thoroughbred bay mare in 1995. She died on January 17, 2009, at the age of 22. His new horse, La Femme Nikita, is a buckskin Morgan, age 7. He tries to ride six days a week.
"Although the cover of Chuck Rosenthal's Ten Thousand Heavens proclaims it a 'novel,' it might more accurately be described as a meditation on mankind's relationship with the animal world, and, more importantly, on the nature of change...The book is at its best when it shows us animals, humans included, trying and usually failing to make sense of new sensations and situations. The chapter titled ‘Think’ is reminiscent of Gertrude Stein’s language games that use repetition to emphasize that understanding something requires one to first figure out the limits of one’s prior knowledge…" -- Daniel Pecchenino, The Los Angeles Review

“What can I say? This is a small masterpiece. A superbly written novel of a horse’s life. It’s more than just a horse story, though. It’s a treatise on how to live, how to listen to the world and know its needs. It’s about learning to find heaven in difficult hearts, and hope in horrendous circumstances. There are passages in this book that I want framed over my desk. I’ve read nothing like this before and am changed by it.” -- Octavio Solis, playwright