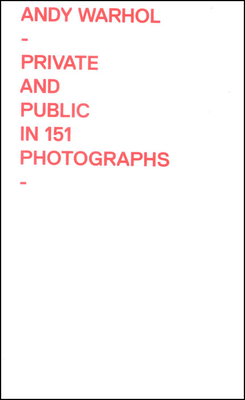 
Special Order—Subject to Availability
This exhibition catalogue explores interconnections between the private and the public in the work of Andy Warhol (1928-1987) as seen in a group of 151 Polaroid and black-and-white photographs donated to the Samuel Dorsky Museum of Art by the Andy Warhol Photographic Legacy Program, a program of the Andy Warhol Foundation for the Visual Arts. Among the wide-ranging subjects of these photographs are Warhol's boyfriend Jon Gould; his friend and collaborator, the painter Jean-Michel Basquiat; fashion-world celebrity Diana Vreeland; the influential art critic and curator Henry Geldzahler; and (more surprisingly) landscapes in Aspen, Colorado. Essays focusing on individual photographs shed new light on these and other subjects, on the significance of photography for Warhol, and, more broadly, on the art and culture of the 1970s and 1980s.

This catalogue is the fruit of an innovative collaboration between the SUNY New Paltz Art History Department and the Samuel Dorsky Museum of Art. Students at SUNY New Paltz developed the concept for the exhibition and designed and wrote essays for the catalogue as part of their participation in two related courses taught at the college in Spring 2009. The catalogue editor, Reva Wolf, a noted Warhol scholar and the author of Andy Warhol, Poetry, and Gossip in the 1960s, oversaw this pioneering project, together with Brian Wallace, curator at the Dorsky Museum.