But How Do It Know?: The Basic Principles of Computers for Everyone (Paperback) 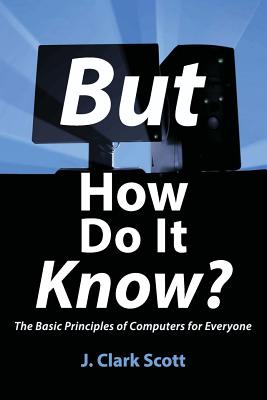 But How Do It Know?: The Basic Principles of Computers for Everyone (Paperback)


Not On Our Shelves—Ships in 1-5 Days
(This book cannot be returned.)
Finally, this brand new book exposes the secrets of computers for everyone to see. Its humorous title begins with the punch line of a classic joke about someone who is baffled by technology.It was written by a 40-year computer veteran who wants to take the mystery out of computers and allow everyone to gain a true understanding of exactly what computers are, and also what they are not.Years of writing, diagramming, piloting and editing have culminated in one easy to read volume that contains all of the basic principles of computers written so that everyone can understand them.There used to be only two types of book that delved into the insides of computers. The simple ones point out the major parts and describe their functions in broad general terms. Computer Science textbooks eventually tell the whole story, but along the way, they include every detail that an engineer could conceivably ever need to know.Like Baby Bear's porridge, But How Do It Know? is just right, but it is much more than just a happy medium. For the first time, this book thoroughly demonstrates each of the basic principles that have been used in every computer ever built, while at the same time showing the integral role that codes play in everything that computers are able to do.It cuts through all of the electronics and mathematics, and gets right to practical matters. Here is a simple part, see what it does. Connect a few of these together and you get a new part that does another simple thing. After just a few iterations of connecting up simple parts - voil - it's a computer. And it is much simpler than anyone ever imagined.But How Do It Know? really explains how computers work. They are far simpler than anyone has ever permitted you to believe. It contains everything you need to know, and nothing you don't need to know. No technical background of any kind is required.The basic principles of computers have not changed one iota since they were invented in the mid 20th century. "Since the day I learned how computers work, it always felt like I knew a giant secret, but couldn't tell anyone," says the author. Now he's taken the time to explain it in such a manner that anyone can have that same moment of enlightenment and thereafter see computers in an entirely new light.
J. Clark Scott has had a long and diverse career in the computer industry, starting at large companies such as IBM and Intel, and eventually becoming the author of four successful consumer software packages. Early in his career, he noticed how confused some of his friends were about computers and gave them lectures to teach them how simple the basics really were. It was at that time that the idea for this book was born. This is his first book, but one that has been in the works for decades.