Journey from the Land of No: A Girlhood Caught in Revolutionary Iran (Paperback) 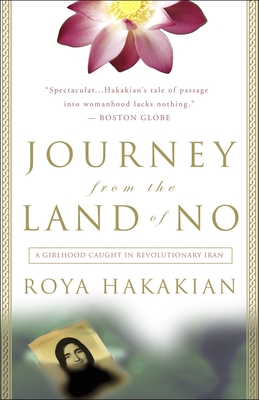 Journey from the Land of No: A Girlhood Caught in Revolutionary Iran (Paperback)


Special Order—Subject to Availability
An emotional, evocative coming-of-age story about one deeply intelligent and perceptive girl’s attempt to find her own voice in prerevolutionary Iran

Roya Hakakian was twelve years old in 1979 when the revolution swept through Tehran. The daughter of an esteemed poet, she grew up in a household that hummed with intellectual life. Family gatherings were punctuated by witty, satirical exchanges and spontaneous recitations of poetry. But the Hakakians were also part of the very small Jewish population in Iran who witnessed the iron fist of the Islamic fundamentalists increasingly tightening its grip. It is with the innocent confusion of youth that Roya describes her discovery of a swastika—“a plus sign gone awry, a dark reptile with four hungry claws”—painted on the wall near her home. As a schoolgirl she watched as friends accused of reading blasphemous books were escorted from class by Islamic Society guards, never to return. Only much later did Roya learn that she was spared a similar fate because her teacher admired her writing.

Hakakian relates in the most poignant, and at times painful, ways what life was like for women after the country fell into the hands of Islamic fundamentalists who had declared an insidious war against them, but we see it all through the eyes of a strong, youthful optimist who somehow came up in the world believing that she was different, knowing she was special.

A wonderfully evocative story, Journey from the Land of No reveals an Iran most readers have not encountered and re-creates a time and place dominated by religious fanaticism, violence, and fear with an open heart.
Roya Hakakian is the author of A Beginner’s Guide to America, Assassins of the Turquoise Palace, and Journey from the Land of No, and has published two collections of poetry in Persian. Her essays have appeared in The New York Times and The Wall Street Journal, and on NPR’s All Things Considered. She has collaborated on programming for leading journalism units in network television, including 60 Minutes. She is the recipient of a Guggenheim Fellowship, and served on the editorial board of World Affairs. Since 2015, she has taught at THREAD, a writing workshop at Yale, and is a fellow at the Davenport College at Yale. She lives in Connecticut.
Winner of the 2004 Elle Readers’ Prize for Best Book of the Year in Nonfiction

“Hakakian’s intimate anthropology opens a window on one life during turbulent times in the Middle East. . . . This book does us the service of removing some of the region’s mythical stereotypes . . . and illuminating a real contemporary culture we would do well to know better.” —Seattle Times

“Hakakian, irrepressible, brave, and strong-willed, watches in dismay as the country she loves disappears, to be replaced by one that views what Roya most values—an insatiable intellect—with profound contempt. Like Anne Frank, she is a perceptive, idealistic, terribly sympathetic chronicler of the gathering repression.” —Baltimore Sun

“A spectacular debut memoir . . . Only a major writing talent like Hakakian can use the pointed words of the mature mind to give the perspective of the child. . . . She tackles ideologies of assimilation and oppression with poetic aplomb and precision. . . . Hakakian’s tale of passage into womanhood lacks nothing.” —Boston Globe

“[Hakakian is] a lyrical storyteller . . . Her moving narrative swings from funny to sad, capturing idyllic scenes of her parents, aunts, and uncles picnicking and interacting with Muslim friends.” —Washington Post