A Fortune-Teller Told Me: Earthbound Travels in the Far East (Paperback) 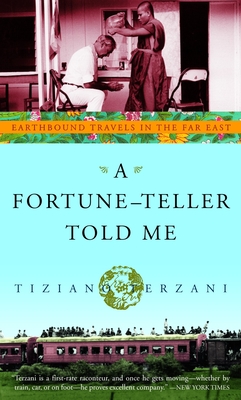 A Fortune-Teller Told Me: Earthbound Travels in the Far East (Paperback)


Not On Our Shelves—Ships in 1-5 Days
“An utterly charming and engaging travel book that offers vivid portraits of unusual corners of Asia, told by a skilled raconteur whose eyes were open wide.” —Los Angeles Times Book Review

Warned by a Hong Kong fortune-teller not to risk flying for an entire year, Tiziano Terzani—a vastly experienced Asia correspondent—took what he called “the first step into an unknown world. . . . It turned out to be one of the most extraordinary years I have ever spent: I was marked for death, and instead I was reborn.”

Traveling by foot, boat, bus, car, and train, he visited Burma, Thailand, Laos, Cambodia, Vietnam, China, Mongolia, Japan, Indonesia, Singapore, and Malaysia. Geography expanded under his feet. He consulted soothsayers, sorcerers, and shamans and received much advice—some wise, some otherwise—about his future. With time to think, he learned to understand, respect, and fear for older ways of life and beliefs now threatened by the crasser forms of Western modernity. He rediscovered a place he had been reporting on for decades. And reinvigorated himself in the process.
For thirty years, Tiziano Terzani has lived in Asia, reporting on its wars and revolutions as Far East correspondent of the German newsmagazine Der Spiegel. Born in Florence, he was educated in Europe and the United States. Since 1994 he has made New Delhi his base.
“Terzani’s thoughtful progression provides great pleasure because he is more open to the people, and people are always the real journey.” —Book Page

“A marvelous traveling companion, Terzani entertains us with his reflections on subjects from astrology to political violence, from the depravity of Bangkok to the sterility of Singapore, and introduces us to the characters he meets along the way.” —O, The Oprah Magazine

“An extraordinary and nuanced account of a journey through the Far East and Southeast Asia.” —Library Journal