Can You Make That Gluten-Free? (Hardcover) 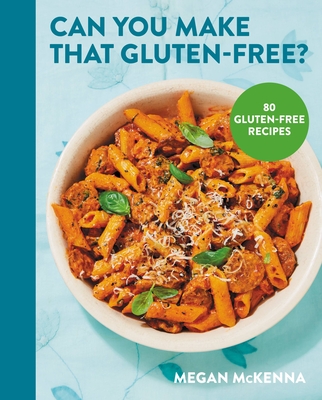 Can You Make That Gluten-Free? (Hardcover)

"Yes, I'm gluten and wheat free. Yes, it's an allergy. Yes, coeliac disease... No, I don't want a salad! If that sounds familiar, and you too want to munch into breaded chicken or enjoy gooey Mac & cheese, then I'm here to show you that, yes, you can make ANYTHING gluten free."

Megan McKenna, Celebrity MasterChef UK finalist, singer-songwriter, highly-engaged influencer, coeliac and home cook invites you into her gluten-free kitchen. After years of sharing her cooking videos to over 4 million viewers, she is regularly messaged to ask: "Can you make that gluten free?"

Now, with more than 80 gluten-free recipes to explore, Megan's first cookbook will prove that you can eat delicious, mouthwatering meals, just like everybody else - simply by swapping a few ingredients along the way.

With chapters covering Quick Bites, Naughty Nights In, Posh Nosh and Heaven O'clock, there's no need to be left out on pancake day, spend another birthday without cake, or miss out on the food at parties and events.

Growing up, Megan was constantly unwell and found herself eating her lunches alone in the stairwell at school. Following her coeliac diagnosis, her mom taught her to cook everything from scratch and she finally gained the strength and resilience enjoy food again.

Megan has had her fair share of trolls, tantrums and toilets, but her relaxed kitchen vibe and down-to-earth recipes have shown millions that you, too, can cook everyday tasty, gluten-free meals.
Megan McKenna is a TV personality, singer-songwriter, coeliac, home cook, Celebrity MasterChef UK finalist, highly-engaged influencer and brand ambassador with social media platforms totalling over 4 million followers. She started her career making appearances on UK TV shows like Ex on the Beach (2015-2016), Celebrity Big Brother (2016) and The Only Way Is Essex (2016-2017), plus stints on The Real Full Monty: Ladies Night (2018) & Celebs Go Dating (2019).

Inspired by her deep-rooted love for all things country music, she had her own three-part ITV series There's Something About Megan and went on to release her debut country album 'Story of Me' with 2 singles hitting number one in the iTunes Country Music charts in 2018. Megan was crowned X Factor Celebrity winner in 2019 and went on to pen the Sunday Times bestselling book 'Mouthy'.

In 2021, Megan's decision to feature on Celebrity MasterChef UK was part inspired by the fact she wanted to educate people about coeliac disease which she suffers from along with a wheat-free allergy. Megan went on to become a finalist and continues to share her gluten and wheat-free homecooked dishes with her millions of followers.

Megan's story has come to be viewed as one of growth, determination, and evolution; fighting off stereotypes, overcoming all obstacles and refusing to be categorised into just one box.