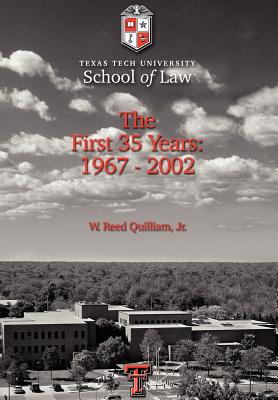 
Not On Our Shelves—Ships in 1-5 Days
(This book cannot be returned.)
Only rarely are the complete facts of an educational institution's history available to later generations of scholars, students, and the general public. In this volume, W. Reed Quilliam, Jr., has provided the facts of the creation and early operation of the Texas Tech University School of Law beginning with the dream of Al Allison, self-described as a "Levelland country lawyer", for the establishment of a law school at Texas Tech.

Quilliam, as a member of the Texas Legislature, was in a position to see enacted the 1965 legislation that authorized the funding for the new law school. He then joined the faculty of the school and served in that capacity from 1966 to 1995. This volume includes the details of the selection of the first Dean, Richard B. Amandes, the assembling of the initial faculty and staff, and the creation of the initial law library.

But beyond that, Quilliam provides an insider's look at faculty politics, the methods used to attract good students, and the successes of the fledging law school in producing graduates who not only could pass the state bar examinations with ease, but also could become effective members of the legal profession.

Quilliam's history gives us not only the history of a single law school, but also shows us what is involved in the creation and successful growth of any American law school.