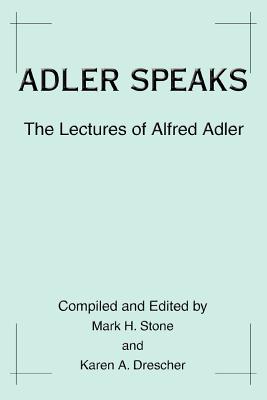 By Karen A. Drescher, Mark H. Stone (With)


Not On Our Shelves—Ships in 1-5 Days
(This book cannot be returned.)
Adler Speaks is a compilation of Alfred Adler's speeches. The initial speeches discuss the Differences between Alfred Adler's Individual Psychology and Sigmund Freud's Psychoanalysis. Additional speeches cover an array of subjects from marriage and family to specific therapeutic issues such as: bashfulness, courage, criminal behavior, eating disorders, laziness, migraines and stuttering. While Most of the chapters are relatively short, they add depth of understanding to Adler's works. "I read with delight the articles in this publication, which were collected from the National Archives in Washington, D.C. While some of the content in them are by no means new to the informed Adlerian, they reflect some of Adler's basic ideas in a new light. They are a welcome addition to the Adlerian literature collection for some of the more seasoned Adlerians and are an excellent beginning for persons who are less familiar with Alfred Adler's ideas."
--John F. Newbauer, Ed.D., President 2002-2004, North American Society of Adlerian Psychology.