No Land in Sight: Poems (Hardcover) 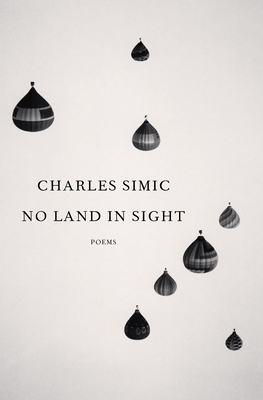 No Land in Sight: Poems (Hardcover)


On Our Shelves Now at:
From one of America's most beloved poets, a piercing new collection reflecting on the characters and encounters that haunt us through this life and into the next

Leading us into a city stirring with gravediggers and beggars, lovers and dogs, Charles Simic returns with a brilliant collection full of his singular wit, dark humor, and tenderheartedness. In poems that are often as spare as they are monumental, he captures the fleeting moments of modern life—peering inside pawnshop windows, brushing shoulders with strangers on the street, and walking familiar cemetery rows—to uncover all the beauty and worry hiding in plain sight.

As the poet reflects on a lifetime’s worth of pleasure and loss, he recalls instances when he “made excuses and hurried away,” and considers the way memory always trails just behind. No Land in Sight is a testament to all we leave in our wake and, simultaneously, all we hang on to: the passing minutes, the evening’s stillness, and the many lives we inhabit in dim thresholds and bright mornings alike.

CHARLES SIMIC is a poet, essayist, and translator who was born in Yugoslavia in 1938 and immigrated to the United States in 1954. Since 1967, he has published more than twenty books of poetry, in addition to a memoir and numerous books of translations for which he has received many honors, including the Pulitzer Prize, the Zbigniew Herbert International Literary Award, the Griffin Poetry Prize, a MacArthur Fellowship, and the Wallace Stevens Award. In 2007, he served as poet laureate of the United States. He was a distinguished visiting writer at New York University and is professor emeritus at the University of New Hampshire, where he has taught since 1973.
A New Yorker Best Book of the Year

“This latest offering from Simic features his signature impish, uncanny take on metaphysics. As he contemplates memory, death, and the detritus of daily life, Simic makes the world itself his interlocutor, projecting his imagination onto the inanimate and in-between.”
—The New Yorker, "The Best Books of 2022 So Far"

“Charles Simic is one of America’s most celebrated poets—and we’re lucky to have him . . . His subject matter [in No Land in Sight] is often dark, but his wry tone complicates every haunting poem.”
—Ron Charles, The Washington Post’s Book Club newsletter