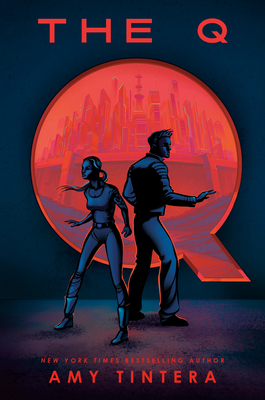 
Coming Soon—Pre-Order Now
In this action-packed adventure from a New York Times bestselling author, two teenagers from opposite worlds must fight their way through a vast walled quarantine zone in a dystopian America toward their only chance for survival.

Seventeen-year-old Maisie Rojas has spent her entire life in the Q—a post-pandemic quarantine zone that was once Austin, Texas. Born and raised behind the high security walls that sealed their fate, she's now a trusted lieutenant for one of the territory's controlling families.

Lennon Pierce, the charismatic son of a US presidential candidate, has just been kidnapped by his father's enemies and dropped out of a plane into the Q with nothing but a parachute strapped to his back. Lennon is given a temporary antidote to the disease and crucial intel for his father, but Maisie must get him out of the zone within forty-eight hours--or he will be permanently infected and forced to remain.

With unrest brewing both inside and outside the Q, reaching the exit is a daunting and dangerous task. But if Maisie and Lennon fail, it could mean disaster for the entire quarantine zone and its inhabitants—and could cost Lennon his life.

Strap in for breakneck action and compelling characters in this timely, nonstop thriller.
Amy Tintera is the New York Times bestselling author of the Ruined and Reboot series and the All These Monsters duology. Her novels have been translated into sixteen languages, sold into more than twenty territories, and optioned for film and TV. A former journalist and assistant at Paradigm Talent Agency, she currently lives in Los Angeles, with her very excited dog, Luna.