The I-5 Killer (Paperback) 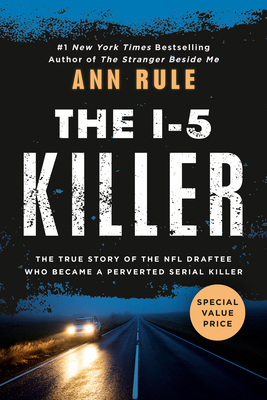 The I-5 Killer (Paperback)


Special Order—Subject to Availability
The terrifying true crime story of the I-5 serial killer from Ann Rule, the #1 New York Times bestselling author of The Stranger Beside Me.

Randall Woodfield had it all. He was an award-winning student and star athlete. He was drafted by the Green Bay Packers to play in the NFL, and chosen by Playgirl as a centerfold candidate. Working in the swinging West Coast bar scene, he had his pick of willing sexual prospects.

But Randall Woodfield wanted more than just sex. An appetite for unspeakable violent acts led him to cruise the I-5 highway through California, Oregon, and Washington, leaving a trail of victims along the way. As the list of his victims grew to a total of at least 44, the police faced the awesome challenge of catching and convicting a suspect who seemed too handsome and appealing to have committed such ugly crimes—crimes that filled every woman within his striking range with feat and horror....
Ann Rule wrote thirty-five New York Times bestsellers. Her first bestseller was The Stranger Beside Me, about her personal relationship with infamous serial killer Ted Bundy. A former Seattle police officer, she used her firsthand expertise in all her books. For more than three decades, she was a powerful advocate for victims of violent crime. She lived near Seattle and passed away in 2015.
Praise for Ann Rule

“Rule has an instinct for suspense, knowing just what information to leak to the reader and when.”—The Washington Post Book World

“A harrowing pathological portrait, a nearly unthinkable triple-murder plot, a hold-your-breath police procedural and a tale of dedication and compassion all superbly combined to produce the most riveting true-crime account since In Cold Blood.”—Kirkus Reviews

“Excellent....One of the most detailed studies of a sociopath to dignify the true-crime circuit.”—The San Francisco Chronicle

“A good read....Rule springs surprises and revelations with a novelist’s skill.”—Seattle Times