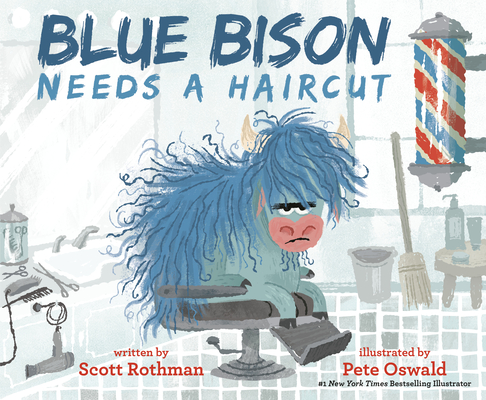 
On Our Shelves Now at:
Blue Bison tries his best to be patient in this humorous picture book from the #1 New York Times bestselling illustrator Pete Oswald.

Blue Bison prides himself on always looking clean and neat. But he has a growing problem--his hair. With the barber shops and just about everywhere else closed, all Blue Bison can do is ram his ramming rock in frustration. Meanwhile, his hair keeps growing.

His dad, Brown Bison, encourages him to be patient and wait, and his mom, Burgundy Bison, tries to explain that sometimes you want something that you really don’t need. But all Blue Bison can do is whine and wallow. Could little sister Bubblegum Bison have the solution?

A wildly hilarious story with a subtle message that waiting is hard but sometimes is necessary.
Scott Rothman is a writer of screenplays and picture books, including Attack of the Underwear Dragon and Return of the Underwear Dragon. His humor writing has appeared in The New Yorker, GQ, and McSweeney's. He lives in Connecticut with his wife and kids.

Pete Oswald is the New York Times bestselling illustrator of The Good Egg, as well as The Bad Seed, which was an Amazon Best Children's Book of the Year and an indie favorite. He has worked as a character designer, a concept artist, and an art director on many popular films, including Madagascar 2, Cloudy with a Chance of Meatballs, and Angry Birds.
"This one puts the ha in 'haircut'—be prepared to snuggle up and laugh often." —Kirkus Reviews