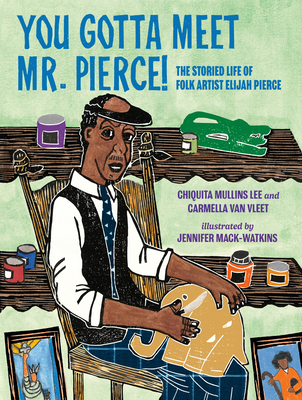 
On Our Shelves Now at:
A picture book biography about the barber shop of woodcarver Elijah Pierce, recipient of the highest folk art honor in the United States.

"Creeeeak!" goes the screen door to self-taught artist Elijah Pierce's barbershop art studio. A young boy walks in for an ordinary haircut and walks out having discovered a lifetime of art.

Mr. Pierce's wood carvings are in every corner of the small studio. There are animals, scenes from his life, and those detailing the socio-political world around him. It's this collection of work that will eventually win Elijah the National Heritage Fellowship in 1982 just two years before his death. But the young boy visiting the shop in the 1970s doesn't know that yet. All he knows is: "You gotta meet Mr. Pierce!"

Based on the true story of Elijah Pierce and his community barber shop in Columbus, Ohio, this picture book includes cleverly collaged museum-sourced photos of his art and informative backmatter about his life. With engaging text by Pierce to the Soul! playwright Chiquita Mullins-Lee and Christopher Award-winning author Carmella Van Vleet, it's illustrated with striking Japanese woodblock by Jennifer Mack-Watkins. A new addition to vital Black art history!
Carmella Van Vleet is a former kindergarten teacher who now writes full-time. She’s the author of over a dozen books including the award-winning middle-grade novel Eliza Bing Is (Not) A Big, Fat Quitter and the picture book To the Stars! The First American Woman to Walk in Space (co-authored with astronaut Kathy Sullivan). Carmella lives in Columbus, Ohio.

Chiquita Mullins Lee is an Arts Learning coordinator at the Ohio Arts Council (OAC) where she manages Ohio’s Poetry Out Loud and Arts Partnership programs. She is a former teaching artist in creative writing on the OAC teaching artist roster, hosted the Emmy-award winning program Traditions: Ohio Heritage Fellows, and has served on the Arts Education review panel for the National Endowment for the Arts.


Jennifer Mack-Watkins is a printmaker whose work investigates power through the complexities of themes like womanhood, beauty, body image, and gender roles. Her solo exhibition "Children of the Sun" at Brattleboro Museum has been featured in the New York Times, Vogue, and Essence Magazine. Read more about her work at mackjennifer.com.
PRAISE FOR YOU GOTTA MEET MR. PIERCE!
THREE STARRED REVIEWS

* "The conversational framing imbues this picture book biography with warmth and intimacy ... There’s plenty of fodder here for themed storytimes on Black history and art." --The Bulletin of the Center for Children's Books, starred review.

"An intimate encounter with an artist who should be better known." --Kirkus Reviews

"Action words (“DRAPE /SNAP,” “SAND/DUST”) evoke movement and expertise throughout, while Mack-Watkins’s use of woodcut textures brings the subject’s medium to the fore." --Publishers Weekly