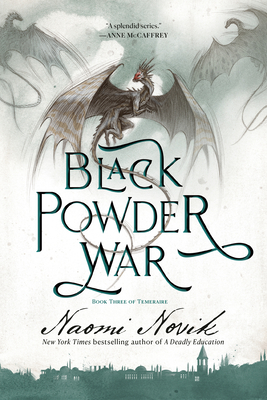 This is book number 3 in the Temeraire series.

In the third novel of the New York Times bestselling Temeraire series, Captain Will Laurence and his dragon transport precious cargo while fending off enemies on all sides.

After their fateful adventure in China, Captain Will Laurence of His Majesty’ s Aerial Corps and his extraordinary dragon, Temeraire, are waylaid by a mysterious envoy bearing urgent new orders from Britain. Three valuable dragon eggs have been purchased from the Ottoman Empire, and Laurence and Temeraire must detour to Istanbul to escort the precious cargo back to England. Time is of the essence if the eggs are to be borne home before hatching.

Yet disaster threatens the mission at every turn—thanks to the diabolical machinations of the Chinese dragon Lien, who blames Temeraire for her master’s death and vows to ally herself with Napoleon and take vengeance. Then, faced with shattering betrayal in an unexpected place, Laurence, Temeraire, and their squad must launch a daring offensive. But what chance do they have against the massed forces of Bonaparte’s implacable army?

HIS MAJESTY’S DRAGON • THRONE OF JADE • BLACK POWDER WAR • EMPIRE OF IVORY • VICTORY OF EAGLES • TONGUES OF SERPENTS • CRUCIBLE OF GOLD • BLOOD OF TYRANTS • LEAGUE OF DRAGONS
Naomi Novik is the acclaimed author of A Deadly Education, the Temeraire series, and the award-winning novels Uprooted and Spinning Silver. She is a founder of the Organization for Transformative Works and the Archive of Our Own. She lives in New York City with her family and six computers.
Praise for His Majesty’s Dragon and the Temeraire series

“These are beautifully written novels—not only fresh, original, and fast paced, but full of wonderful characters with real heart. [The Temeraire series] is a terrific meld of two genres that I particularly love—fantasy and historical epic.”—Peter Jackson

“A terrifically entertaining fantasy novel . . . Is it hard to imagine a cross between Susanna Clarke, of Norrell and Strange fame, and the late Patrick O’Brian? Not if you’ve read this wonderful, arresting novel.”—Stephen King

“A splendid series . . . Not only is it a new way to utilize dragons, it’s a very clever one and fits neatly into the historical niche this author has used.”—Anne McCaffrey

“Just when you think you’ve seen every variation possible on the dragon story, along comes Naomi Novik. Her wonderful Temeraire is a dragon for the ages.”—Terry Brooks

“A completely authentic tale, brimming with all the detail and richness one looks for . . . as well as the impossible wonder of gilded fantasy.”—Entertainment Weekly (Editor’s Choice, Grade: A)

“Novik has accomplished something singular with her Temeraire series. . . . At its heart, it’s a story about friendship that transcends not only time and class, but species.”—NPR

“[Naomi Novik] is soaring on the wings of a dragon.”—The New York Times

“An amazing performance . . . [I] was immediately hooked by the writing, the research and the sheer courage of the whole enterprise.”—Chicago Tribune

“Novik’s influences run the gamut from Jane Austen to Patrick O’Brian, with a side trip through Anne McCaffrey. Her books are completely involving and probably addictive, their central conceit explored in clever detail with a great deal of wit and historical insight.”—San Francisco Chronicle

“Something new and quite wonderful . . . The Temeraire trilogy could well be this year’s Jonathan Strange and Mr. Norrell.”—BookPage

“A superbly written, character-driven series . . . What keeps one turning the pages is the urge to find out what happens next to Captain Laurence and Temeraire, characters who win one’s heart from the beginning. Bravo!”—Booklist (starred review)