I Know Who You Are: How an Amateur DNA Sleuth Unmasked the Golden State Killer and Changed Crime Fighting Forever (Hardcover) 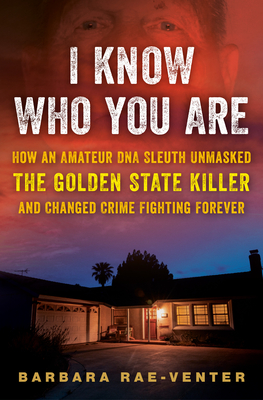 I Know Who You Are: How an Amateur DNA Sleuth Unmasked the Golden State Killer and Changed Crime Fighting Forever (Hardcover)

“Barbara Rae-Venter isn't just the genealogy expert who helped capture the Golden State Killer—she’s an unsung hero who has given murdered women and children their faces and names back, the recognizing that their lives mattered.”—Maureen Callahan, New York Times bestselling author of American Predator

For twelve years the Golden State Killer terrorized California, stalking victims and killing without remorse. Then he simply disappeared, for the next forty-four years, until an amateur DNA sleuth opened her laptop. In I Know Who You Are, Barbara Rae-Venter reveals how she went from researching her family history as a retiree to hunting for a notorious serial killer—and how she became the nation’s leading authority on investigative genetic genealogy, the most dazzling new crime-fighting weapon to appear in decades.

Rae-Venter leads readers on a vivid journey through the many cases she tackled, often starting with little more than a DNA sample. From the first criminal case she ever solved—uncovering the long-lost identity of a child abductee—to the heartbreaking story of the Billboard Boy, whose skeletal remains were discovered along a highway, to the search for the Golden State Killer, Rae-Venter shares haunting, often thrilling accounts of how she helped solve some of America’s most chilling cold cases in the span of just three years.

For each investigation, Rae-Venter brings readers inside her unique “grasshopper mind” as she analyzes DNA data and pores through obituaries, marriage records, and old newspaper articles. Readers join in on urgent calls with sheriffs, FBI agents, and district attorneys as she details the struggle to obtain usable crime scene DNA samples, until, finally, a critical piece of the puzzle tumbles into place.

I Know Who You Are captures both the exhilaration of the moment of discovery and the sheer depth of emotion that lingers around cold cases, informing Rae-Venter’s careful approach to her work. It is a story of relentless curiosity, of constant invention and reinvention, and of human beings striving to answer the most elemental questions about themselves: What defines identity? Where do we belong? And are we truly who we think we are?
Barbara Rae-Venter is a New Zealand–born American investigative genetic genealogist, biochemist, and retired patent attorney best known for her work helping the FBI and other investigators identify Joseph James DeAngelo as the Golden State Killer. She earned a Ph.D. at the University of California at San Diego and later a law degree at the University of Texas at Austin Law School. Rae-Venter is a founder and the president of Firebird Forensics Group, a not-for-profit corporation. Her investigative work earned her a place on the Time 100 list of most influential people in 2019, and she was recognized by the journal Nature as one of “10 People Who Mattered in Science in 2018.”
“I Know Who You Are is a true-crime masterpiece written by a cold-case-cracking master. Barbara Rae-Venter’s investigative DNA work has revolutionized the way law enforcement hunts serial killers. This page-turner takes readers inside the web of lies spun by the worst criminal minds and reveals the path to solving the country’s most notorious crimes. It's an epic read and a searingly important story.”—John Douglas, New York Times bestselling co-author of Mindhunter: Inside the FBI’s Elite Serial Crime Unit

“This book is an invaluable addition to the true-crime genre.”—Maureen Callahan, New York Times bestselling author of American Predator: The Hunt for the Most Meticulous Serial Killer of the 21st Century

“I Know Who You Are is a propulsive true-crime thriller that takes the reader deep inside the manhunt for one of the most terrifying serial killers in American history. Barbara Rae-Venter’s admirable work as a DNA sleuth provided the searing heat that melted the coldest of cold cases.”—Casey Sherman, New York Times bestselling author of Helltown: The Untold Story of a Serial Killer on Cape Cod

“I Know Who You Are offers an immersive, compelling account of a revolution in crime-fighting from the woman who pioneered it. With urgency and insight, Barbara Rae-Venter tells the unlikely story of a retired patent attorney whose obsessive, scientific mind transformed her from a genealogical hobbyist into the who helped identify one of America’s most notorious serial killers. Rae-Venter’s deep dive into the Golden State Killer case explores the science, history, and ethics around a technique that has led to the solving of hundreds of cold cases, a fierce debate over privacy, and a burgeoning awareness of the power of DNA technology to transform our lives by revealing the truth about the past.”—Libby Copeland, author of The Lost Family: How DNA Testing Is Upending Who We

“A remarkable account . . . Rae-Venter makes the science accessible and delves into the controversy that forensic genealogy has engendered because of privacy concerns. . . . It’s an eye-opening and thought-provoking contribution to the true crime genre.”—Publishers Weekly (starred review)

“Fascinating true-crime reportage infused with cinematic suspense . . . [Barbara Rae-Venter’s] chronicle is a solid testament to the evolution of genetic forensic science and how it has made investigators more effective in apprehending criminals, both from cold cases and those in real time. It’s also an examination of corrupted humanity gone haywire and the thrill and release of an abuser being brought to justice.”—Kirkus Reviews