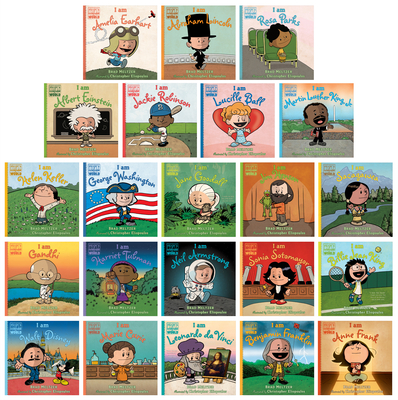 
Special Order—Subject to Availability
The full library of 22 titles in the New York Times bestselling Ordinary People Change the World series, together for the first time!

What makes a hero? This engaging picture-book biography series answers the question, one great historical figure at a time. Now all 22 titles can be purchased together: activists, artists, scientists, sports figures, and others who fought to make an impact in our world.

From Martin Luther King, Jr., and Rosa Parks, who stood up against racial injustice, to Neil Armstrong and, Marie Curie, who made groundbreaking scientific discoveries, to the newest heroes in the series, Anne Frank and Benjamin Franklin, this set includes a role model for every reader.
Brad Meltzer is the New York Times bestselling author of Heroes for My Son, Heroes for My Daughter, The First Conspiracy, and a number of suspense novels like The Escape Artist. He also helped find the missing 9/11 flag with his is History Channel television show Brad Meltzer's Lost History. He lives in Florida with his wife and their three children.

Christopher Eliopoulos began his illustration career at Marvel Comics, and has worked on thousands of comics, including Cosmic Commandos and Monster Mayhem. He is the author/illustrator of the picture book The Yawns Are Coming! He lives in New Jersey with his wife and their identical twin sons (when the boys are home from college).