Groundhog Gets It Wrong (Hardcover) 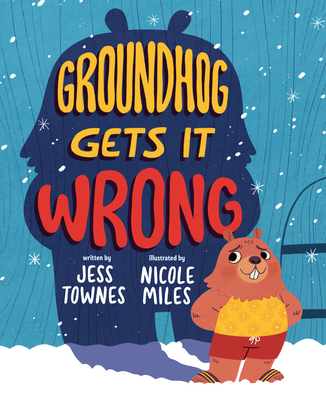 Groundhog Gets It Wrong (Hardcover)

Groundhog is shocked and a bit ashamed when he discovers that he doesn’t have innate weather-predicting gifts—especially when his mis-forecast ruins the spring carnival.

First he tries fixing his mistake, but when shoveling up the snow and hosing it away turns out to cause more problems, he realizes that  the only way to truly fix his mistake might just be to literally learn his meteorological lessons.
Jess Townes is the author of several forthcoming picture books. A lifelong storyteller, Jess has worked in public education, non-profit development, birth and lactation services, as a freelance writer and an actress, but her favorite part of any job is the connections she builds with other people. She believes that there is no better path to those connections than through our stories. Jess lives outside St. Louis with her husband, two teenagers, two cats and a fifty-pound lap dog.

Nicole Miles is an Eisner-nominated cartoonist, illustrator hand-letterer, and designer whose clients include the New York Times, Buzzfeed, Bust Magazine, and Bitch Magazine. She is the illustrator of several books, including I Want My Book Back by Viviane Elbee, Alley and Rex by Joel Ross, and The Anti-Racist Kid by Tiffany Jewel.  Originally from the Bahamas, Nicole currently resides in West Yorkshire with her pet snake and human boyfriend.

“This pro-science fable …makes an unmistakable point: there are no shortcuts to understanding one’s calling, one’s strengths, or the natural world.”—Publishers Weekly

“Townes provides a witty take on the bizarre tradition of Groundhog Day, enhanced by a well-paced plot that humorously relies on the tension caused by Groundhog’s unearned authority...Miles’ digital illustrations highlight the action and humorous moments, and auxiliary sound effects and speech bubbles will support a spirited storytime rendition.” –BCCB