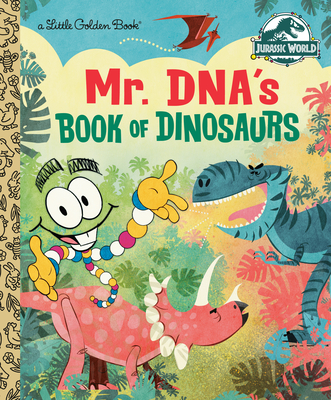 
Not On Our Shelves—Ships in 1-5 Days
Jurassic Park’s Mr. DNA introduces young readers to his favorite dinosaurs in this Little Golden Book—just in time for Jurassic World Dominion, roaring into theaters June 10, 2022!

Mr. DNA, the friendly animated strand of DNA who first appeared in Jurassic Park, stars in his own Little Golden Book! And like his movie counterpart, he'll take young fans on a tour of their favorite prehistoric creatures from T. rex to Triceratops and from Brachiosaurus to Blue the Velociraptor.Mr. DNA's Book of Dinosaurs is perfect for young dinosaur fans ages 3 to 5 and parents who remember him fondly.

Little Golden Books enjoy nearly 100% consumer recognition. They feature beloved classics, hot licenses, and new original stories . . . the classics of tomorrow.
Arie Kaplan is the author of several books, both fiction and nonfiction. Most recently, he wrote the Doctor Strange Little Golden Book, which is available now from Penguin Random House. He also wrote three of the stories in the 5-Minute Avengers Stories prose fiction anthology, which is out now from Disney Book Group's Marvel Press imprint. As a nonfiction author, Arie is most well-known for writing the award-winning book From Krakow To Krypton: Jews And Comic Books, which is available now from the Jewish Publication Society.