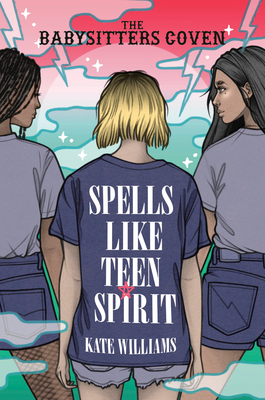 The final installment in the hilarious, action-packed Babysitters Coven series that Refinery29 calls "candy for 90's girls and Gen Z'ers alike," featuring a coven of witchy babysitters sworn to protect the innocent and defend the world from an onslaught of evil--all before bedtime.

Ever since Esme met Cassandra Heaven and discovered the truth about their shared legacy--that they're Sitters, supernaturally gifted teens tasked with protecting the innocent from evil--her life has been moving at 90 mph. During the day, she chases wild toddlers, and at night, she employs a different skill set for a different kind of demon. Like, literal ones. And sometimes it's almost fun. Her spells are getting better, her telekinesis is on point, and now that Esme's dad and her best friend Janis know the truth, she's no longer lying to the people she loves. She's also learned that there's a way to undo her mother's curse, and with the Synod out of the picture, she might even have a chance to do it.

If she could just figure out how. But she can't, and even with her mom living at home again, Esme can't shake the feeling that she's failing. Throw in the fact that Pig is still gone, Esme's crush is MIA, and it's cold, slushy February, and she's in bummer city.

Esme needs a serious pick-me-up, and Janis has a plan: a Galentine's stay-cation, with the Sitter friends Esme and Cassandra made at the Summit. Except things are getting weird in Spring River again. Esme and Cassandra just discovered a new band, and not in a good way: these guys reek of Red Magic, and their music sucks. Trouble is brewing, and if Esme's not careful, this show might be her last--and no one likes a one-hit wonder.
Kate Williams has written for Seventeen, NYLON, Cosmopolitan, Bustle, Vans, Calvin Klein, Urban Outfitters, and many other brands and magazines. She is the author of The Babysitters Coven trilogy: The Babysitters Coven, For Better or Cursed, and Spells Like Teen Spirit. Kate lives in Kansas. To learn more about her and her books, go to heykatewilliams.com or follow @heykatewilliams on Twitter and Instagram.
"The Baby-Sitters Club...but spooky and with an Instagram-model-hot character for good measure." --Cosmopolitan

"Buffy-meets-Babysitters Club, this frothy fantasy-horror will draw readers purely on its premise.... Decidedly on-trend with its witchy focus and its nostalgic-for-the-'90s reboot vibe." --Bulletin

"Baby-Sitters Club meets The Chilling Adventures of Sabrina in this delightful new young adult novel about two teenagers who discover that they're more than just babysitters." --Bustle

"For chill fun and fun chills, there's no better place to start than here." --Paste Magazine