The Art of Patience: Seeking the Snow Leopard in Tibet (Hardcover) 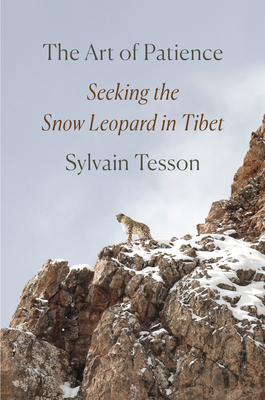 The Art of Patience: Seeking the Snow Leopard in Tibet (Hardcover)

Adventurer Sylvain Tesson has led a restless life, riding across Central Asia on horseback, freeclimbing the Eiffel Tower and Notre Dame, and traversing the Himalayas by foot. But while recovering from an accident that left him in a coma, and nursing his wounds from a lost love, he found himself domesticated, his lust for life draining with each moment spent staring at a screen. An expedition to the mountains of Tibet, in search of the famously elusive snow leopard, presented itself as a cure.

For the chance to glimpse this near mythical beast, Tesson and his companions must wait for hours without making a sound or a movement, enduring the thin air and brutal cold. Their vigil becomes an act of faith--many have pursued the snow leopard for years without seeing it--and as they keep their watch, Tesson comes to embrace the virtues of patience and silence. His faith is rewarded when the snow leopard, the spirit of the mountain, reveals itself: an embodiment of what we have surrendered in our contemporary lives. And the simple act of waiting proves to be an antidote to the frenzy of our times.

A celebration of the power and grace of the wild, and a requiem for the world's vanishing places, The Art of Patience is a revelatory account of the communion between nature and the human heart. Sylvain Tesson has written a new masterpiece on the relationship between man and beast in prose as sublime as the wilderness that inspired it.
Sylvain Tesson has walked from Russia to India, participated in archaeological expeditions in Afghanistan and Pakistan, and wintered alone in a cabin on a lake in Siberia. He earned a diplôme d’études appliquées in geopolitics at the University of Paris VIII. One of France’s most celebrated writers, he has been awarded the Prix Médicis Essai and the Prix Goncourt de la Nouvelle. An international bestseller, The Art of Patience won the Prix Renaudot in 2019.
“In The Art of Patience: Seeking the Snow Leopard in Tibet,  the French writer Sylvain Tesson chronicles his rapturous journey through Tibet’s Chantang plateau with the wildlife photographer Vincent Munier. Tesson’s words, in a ravishing translation by Frank Wynne, paint pictures as vivid as any photograph.” —The New York Times Book Review

“The Art of Patience is extraordinarily beautiful, a narrative of prose that flows with poetry, a long, last loving glance at the planet, a visit to the vital bedside of a living world determined to stay alive.” —Carl Safina, author of Becoming Wild: How Animals Learn to be Animals

“A wonderful evocation of waiting and watching for nature.” —Tim Birkhead, author of The Wisdom of Birds and Bird Sense