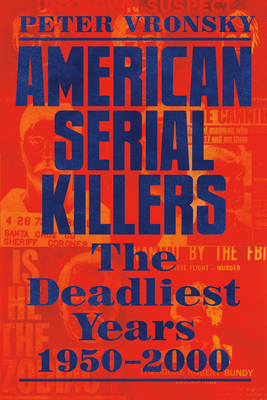 
Not On Our Shelves—Ships in 1-5 Days
Fans of Mindhunter and true crime podcasts will devour these chilling stories of serial killers from the American "Golden Age" (1950-2000).

With books like Serial Killers, Female Serial Killers and Sons of Cain, Peter Vronsky has established himself as the foremost expert on the history of serial killers.  In this first definitive history of the "Golden Age" of American serial murder, when the number and body count of serial killers exploded, Vronsky tells the stories of the most unusual and prominent serial killings from the 1950s to the early twenty-first century. From Ted Bundy to the Golden State Killer, our fascination with these classic serial killers seems to grow by the day. American Serial Killers gives true crime junkies what they crave, with both perennial favorites (Ed Kemper, Jeffrey Dahmer) and lesser-known cases (Melvin Rees, Harvey Glatman).
Peter Vronsky, PhD, is an investigative historian and a former film and television documentary producer. He is the author of Serial Killers: The Method and Madness of Monsters; Female Serial Killers: How and Why Women Become Monsters; and Sons of Cain: A History of Serial Killers from the Stone Age to the Present. He is an authority on Canada’s first modern battle, which he has written about in his definitive book, Ridgeway: The American Fenian Invasion and the 1866 Battle That Made Canada.
Peter Vronsky holds a PhD from the University of Toronto in the fields of criminal justice history and the history of espionage in international relations. He teaches history at Ryerson University in Toronto. He divides his time between Toronto, Canada, and Venice, Italy.
Praise for American Serial Killers

“Renowned true crime author Vronksy has composed an exhaustive history of these epidemic years, recounting the atrocities of heavy-hitters like Ted Bundy and introducing readers to more obscure murderers like Melvin Rees. . .Thoroughly researched and highly detailed, Vronsky’s analysis of the “golden age” of serial killers is an essential true crime reference work.”—Booklist