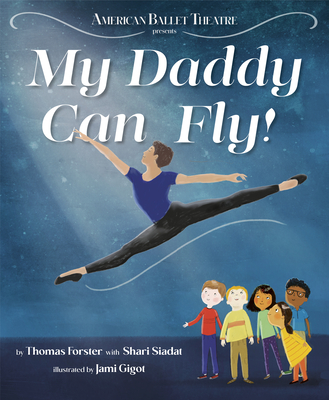 
In Stock—Click for Locations
For young dance lovers, a picture book about a young boy whose father has the unique position as a ballet dancer. Written by American Ballet Theatre principal dancer Thomas Forster.

Ben tells his friends that they aren't even close, but he offers a few more clues. His daddy is strong, gentle, fierce, and fast. His friends have lots of guesses, but no one lands on the right one until Ben gives them the biggest clue of all.

Shari Siadat is an author, dancer, model, and activist, whose work focuses on identity, beauty standards, and movement as a mechanism for self-discovery.

AMERICAN BALLET THEATRE is considered one of the greatest dance companies in the world. Revered as a national treasure since its founding in 1939, its mission is to create, present, preserve, and extend the great repertoire of classical dancing. Located in New York City, ABT tours the United States annually and has made more than 30 international tours to 45 countries. ABT's repertoire includes full-length classics from the nineteenth century, the finest works from the early twentieth century, and acclaimed contemporary masterpieces. In 2006, by an act of Congress, ABT became America's National Ballet Company®. Find out more at ABT.org and follow them on Instagram at @abtofficial and on Twitter at @ABTBallet.

Jami Gigot is an author-illustrator and created picture books such as Mae and the Moon and Imagination Vacation. She has worked as a digital artist on such feature films as Avatar, Charlie and the Chocolate Factory, and Ant-Man and the Wasp. After living in Madison, Los Angeles, and London, she now lives in beautiful Vancouver, BC, with her husband, two children, and a big orange cat.