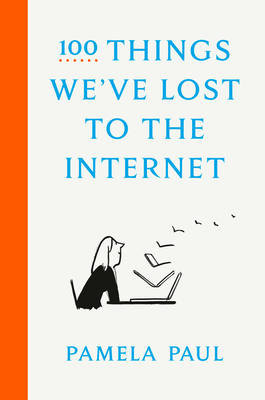 
On Our Shelves Now at:
The acclaimed editor of The New York Times Book Review takes readers on a nostalgic tour of the pre-Internet age, offering powerful insights into both the profound and the seemingly trivial things we've lost.

NAMED ONE OF THE TEN BEST BOOKS OF THE YEAR BY CHICAGO TRIBUNE AND THE DALLAS MORNING NEWS • “A deft blend of nostalgia, humor and devastating insights.”—People

To some of those things we can say good riddance. But many we miss terribly. Whatever our emotional response to this departed realm, we are faced with the fact that nearly every aspect of modern life now takes place in filtered, isolated corners of cyberspace—a space that has slowly subsumed our physical habitats, replacing or transforming the office, our local library, a favorite bar, the movie theater, and the coffee shop where people met one another’s gaze from across the room. Even as we’ve gained the ability to gather without leaving our house, many of the fundamentally human experiences that have sustained us have disappeared.

In one hundred glimpses of that pre-Internet world, Pamela Paul, editor of The New York Times Book Review, presents a captivating record, enlivened with illustrations, of the world before cyberspace—from voicemails to blind dates to punctuation to civility. There are the small losses: postcards, the blessings of an adolescence largely spared of documentation, the Rolodex, and the genuine surprises at high school reunions. But there are larger repercussions, too: weaker memories, the inability to entertain oneself, and the utter demolition of privacy.

100 Things We’ve Lost to the Internet is at once an evocative swan song for a disappearing era and, perhaps, a guide to reclaiming just a little bit more of the world IRL.
Pamela Paul is the editor of The New York Times Book Review and oversees book coverage at the Times, where she hosts the weekly Book Review podcast. She is the author of eight books, including My Life with Bob; How to Raise a Reader; By the Book; Parenting, Inc.; Pornified; The Starter Marriage and the Future of Matrimony; and Rectangle Time, a book for children. Prior to joining The New York Times, she was a contributor to Time and The Economist, and her work has appeared in The Atlantic, The Washington Post, and Vogue.
“[A] rare feat of exploring what technology has done to us without succumbing to doom and panic . . . Poignant, thought-provoking.”—The Guardian

“An accomplished solo act . . . Readers who remember the dawning of the internet era will find plenty to commiserate with in this mostly lighthearted lament.”—Publishers Weekly