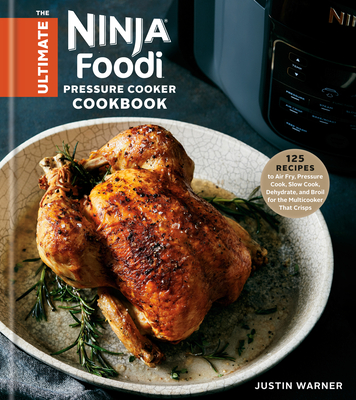 
Not On Our Shelves—Ships in 1-5 Days
It's a multicooker--it's an air fryer--it even has a built-in crisping element! Welcome to your newest all-in-one cooking appliance obsession, the Ninja Foodi. This officially licensed book is the ultimate guide to cooking with the Foodi--with 125 recipes from Food Network celebrity chef Justin Warner who helped test and design the appliance along with full color photos.

Finally, a one-step countertop cooking appliance that truly does it all. The 125 recipes in the Foodi cookbook offer air-frying, pressure-cooking, and slow-cook recipes from breakfast through dinner. Approachable and friendly, you'll find guidance for making air-fried French toast sticks as well as perfect Japanese-style omelets; golden-brown and crisp-topped macaroni and cheese; miso-glazed cod; Singapore-style mei fun; crispy-fried chicken wings; taquitos; and even crème brûlée! Eclectic, worldly, and easy enough for every day, The Ultimate Ninja Foodi Cookbook offers something for everyone.
JUSTIN WARNER is the winner of the eighth season of Food Network Star, author of the cookbook The Laws of Cooking and How to Break Them, and the former chef/co-owner of Michelin-starred Do or Dine restaurant in Brooklyn, New York. His first Food Network appearance was on 24 Hour Restaurant Battle in 2010, which he won. He continues to be a frequent guest on Food Network shows like Guy's Grocery Games and hosts Foodie Call, a new Food Network web series, as well as Marvel Eat the Universe, a digital series for Marvel.