The Way of the Cocktail: Japanese Traditions, Techniques, and Recipes (Hardcover) 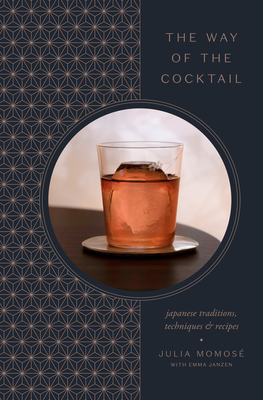 The Way of the Cocktail: Japanese Traditions, Techniques, and Recipes (Hardcover)

By Julia Momosé, Emma Janzen (With)


In Stock—Click for Locations
A rich, transportive guide to the world of Japanese cocktails from acclaimed bartender Julia Momosé of Kumiko

With its studious devotion to tradition, craftsmanship, and hospitality, Japanese cocktail culture is an art form treated with reverence. In this essential guide, Japanese American bartender Julia Momosé of Kumiko and Kikkō in Chicago takes us on a journey into this realm. She educates and inspires while breaking down master techniques and delving into the soul of the culture: the traditions and philosophy, the tools and the spirits—and the complex layering of these elements that makes this approach so significant.

The recipes are inspired by the twenty-four micro-seasons that define the flow of life in Japan. Enter a world where the spiced woodsy cocktail called Autumn’s Jacket evokes the smoldering burn of smoking rice fields in fall, and where the Delicate Refusal tells the tale of spring’s tragic beauty, with tequila blanco and a flutter of sakura petals. Perfected classics like the Manhattan and Negroni, riffs on some of Japan’s most beloved cocktails like the Whisky Highball, and even alcohol-free drinks influenced by ingredients such as yuzu, matcha, and umé round out the collection.
Born and raised in Japan, Julia Momosé has infused the sensibilities of Japanese bartending culture into every cocktail program she has contributed to, from the Michelin-starred GreenRiver and its companion lounge, The Annex, to Oriole, a two-Michelin-starred tasting menu restaurant in Chicago. She then opened her own bar, the acclaimed Kumiko, an intimate Japanese drinking experience in Chicago, followed by the omakasé counter Kikkō, which earned a Michelin star. She lives in Chicago with her husband, fellow bartender Sammy Faze, in a household of plants.

Emma Janzen is a journalist, editor, and photographer specializing in all things drinks and design. Her first book, Mezcal: The History, Craft & Cocktails of the World’s Ultimate Artisanal Spirit, was nominated for a James Beard Award. She lives in Chicago with her husband and two tuxedo cats.
“A love letter to the art of preparing a drink . . . the drinks wink from the pages like glittering jewels: the beautiful pink and green Hishimochi bitters and soda, a wisteria cocktail the color of the sky before rain, a vintage award-winning drink called Sky Diving which looks, delightfully, just how it sounds.”—Vanity Fair

“Momosé provides a treasure chest overflowing with tips for mere mortal bartenders to re-create her graceful style of bartending.”—Chicago Tribune

“These modern Japanese cocktails will mentally transport you across the globe.”—Shape

“After expertly surveying the contemporary cocktail landscape of Japan and how it came to be, Julia Momosé welcomes readers behind her bar to explore the tools, techniques, and philosophy she employs to craft her groundbreaking mixed drinks.”—Jim Meehan, author of Meehan’s Bartender Manual and The PDT Cocktail Book

“Through a mix of personal history, reporting, and an impressive collection of classic and original recipes, Julia Momosé, with writing support by Emma Janzen, has synthesized the craftsmanship, the harmony, and, perhaps most important, the ethereal magnetism of the Japanese approach to cocktails. The Way of the Cocktail is itself a reflection of the Japanese way.”—Talia Baiocchi, founder and editor-in-chief of PUNCH

“Julia Momosé’s long-awaited cocktail book is the first to precisely convey why Japanese cocktail culture is so unique. With her beautiful mind, passion, and talent, Momosé gives readers a deep understanding of Japanese cocktails and will encourage and inspire Japanese bartenders as well. She reminds bartenders like ourselves of all of the special elements of our culture that we often take for granted.”—Takuo and Sumire Miyanohara, founders, owners, and bartenders of Bar Orchard Ginza