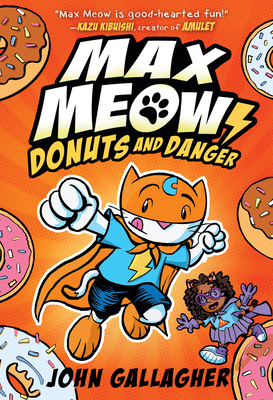 This is book number 2 in the Max Meow series.

Calling all GRAPHIC NOVEL FANS! Do you like DONUTS? Do you crave DANGER? Then Max Meow-the graphic novel series with CAT-ITUDE--is PURR-fect for you! Just right for fans of Dogman, Bad Guys, InvestiGators and anyone who LOVES TO LAUGH!

Meowza! Max was just getting used to being a SECRET SUPER HERO when his and his best friend Mindy's evil look-alikes show up in Kittyopolis! And what's worse, they're determined to take over the world's donut supply--and Max and Mindy are getting blamed! Can Max and Mindy work together to save the day--and the donuts?! Find out in Max Meow Book 2: Donuts and Danger! A deliciously funny series that's so good you'll want seconds! Bonus! Includes How to Draw Mindy AND Max Meow's SECRET Donut Scavenger hunt!
John Gallagher is the art director of the National Wildlife Federation's "Ranger Rick" magazine and has been drawing comics since he was five (John learned to read through comics and went on to earn the distinction of reading every book in his elementary school library!). John is also the cofounder of "Kids Love Comics" (an organization devoted to using graphic novels to promote literacy) and leads workshops teaching kids how to create their own comics. John lives in Virginia with his wife and their three kids. Visit him at MaxMeow.Com, on twitter @johnBGallagher, on facebook @MaxMeowCatCrusader and on instagram @johngallagher_cartoonist.
"Max Meow is good-hearted fun!" —Kazu Kibuishi, creator of Amulet

"A heaping helping of candy colored fun!" —Ben Hatke, creator of the Zita the Spacegirl and Mighty Jack series

"Cats and kittens alike will be thrilled to finally have a hero they can look up to." —Mike Maihack, creator of Cleopatra in Space series

"Max Meow is sure to save any young reader's day with super-laughs on every page!" —Norm Feuti, syndicated cartoonist and creator of the Hello, Hedgehog series