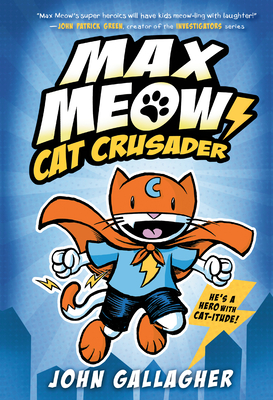 This is book number 1 in the Max Meow series.


Max is just a regular cat in Kittyopolis, trying to make it big as a podcaster UNTIL he accidentally takes a bite of an RADIOACTIVE SPACE MEATBALL at his best friend Mindy's SECRET LAB. Then before you can say MEOWZA, Max becomes...The CAT CRUSADER! Being a super hero is fun--but not if you get so cocky, you forget your best friend! Will Max and Mindy make up? And together, can they save Kittyopolis from the evil Agent M and BIG BOSS?! Find out in this furr-ociously funny series! BONUS: Includes how to draw Max Meow!

"Max Meow's super heroics will have kids meow-ling with laughter!" --John Patrick Green, creator of the InvestiGators series
John Gallagher is the art director of the National Wildlife Federation's "Ranger Rick" magazine and has been drawing comics since he was five. John is also the cofounder of "Kids Love Comics" (an organization devoted to using graphic novels to promote literacy) and leads workshops teaching kids how to create their own comics. John lives in Virginia with his wife and their three kids. Visit him at MaxMeow.Com, on twitter @johnBGallagher, on facebook @MaxMeowCatCrusader and on instagram @johngallagher_cartoonist.
MEOWZA! Here's what people are saying about MAX MEOW:

“Full of humor and action, this new series opener will be catnip for fans of Dav Pilkey’s Dog Man.” —Kirkus Reviews

"A heaping helping of candy colored fun!" —Ben Hatke, creator of the Zita the Spacegirl and Mighty Jack series

"Cats and kittens alike will be thrilled to finally have a hero they can look up to." —Mike Maihack, creator of Cleopatra in Space series

"Max Meow is sure to save any young reader's day with super-laughs on every page!" —Norm Feuti, syndicated cartoonist and creator of the Hello, Hedgehog series


"Big on vibrant, high-energy artwork—a combination that’s sure to keep even the most hesitant of readers engaged. . . . Fans of Dav Pilkey’s “Dog Man” series will love this quirky graphic novel." —School Library Journal