Sing with Me: The Story of Selena Quintanilla (Hardcover) 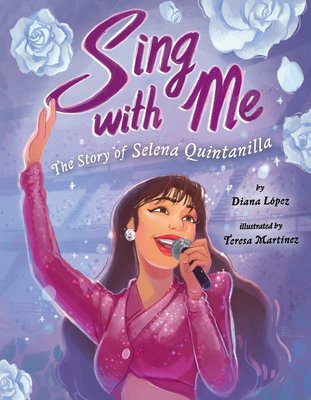 Sing with Me: The Story of Selena Quintanilla (Hardcover)


On Our Shelves Now at:
An exuberant picture book celebrating the life and legacy of Selena Quintanilla, beloved Queen of Tejano music.

From a very early age, young Selena knew how to connect with people and bring them together with music. Sing with Me follows Selena's rise to stardom, from front-lining her family's band at rodeos and quinceañeras to performing in front of tens of thousands at the Houston Astrodome. Young readers will be empowered by Selena's dedication--learning Spanish as a teenager, designing her own clothes, and traveling around the country with her family--sharing her pride in her Mexican-American roots and her love of music and fashion with the world.
Diana López is the author of numerous middle grade novels, including Confetti Girl and Ask My Mood Ring How I Feel. She also wrote the novel adaptation for the Disney/Pixar film Coco. A retired professor of English, Diana López now writes full time in her hometown of Corpus Christi, Texas.

Teresa Martinez is the illustrator of numerous books for children, including The Halloween Tree and It's Not a Bed, It's a Time Machine. She lives in Puerto Vallarta, Mexico, and is a huge fan of Selena's music.
New York Public Library Best Books for Kids

*“Corpus Christi native López smartly focuses on the road that got Selena [Quintanilla] to her success and all the work and study that went into overcoming genre, racial, and gender divides in the music industry. She gets the details and tone right, whether it’s in capturing her subject’s passion for performing or simply sprinkling in Spanish words and phrases without overexplaining them. Martinez’s illustrations capture the Quintanilla family’s loving moments and convey extra information with the layering in of postcards, banners, street signs, and lyrics. A Spanish-language edition, translated by Carmen Tafolla, is equally on target, with careful phrasing and a warmth in tone. . . . A worthy, sparkling addition.”—Kirkus Reviews, starred review

*“The energetic, bright cartoon illustrations depicting Selena and her family in various venues, decorated with rainbow notes, stars, hearts, and flowers will appeal to young readers. . . . Will inspire anyone who dreams of a career in the performing arts.”—School Library Journal, starred review