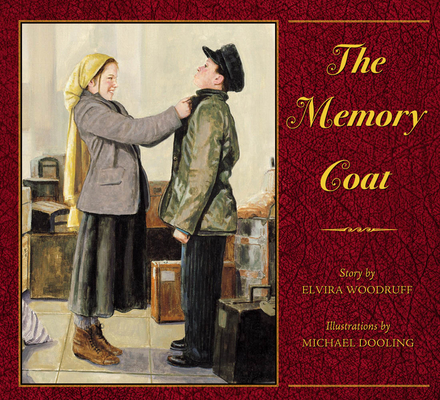 
Not On Our Shelves—Ships in 1-5 Days
This moving story of a Jewish family's immigration to American from Russia may be jeopardized by a young cousin's bond with a worn-out coat.At the turn-of-the century, a Jewish family must leave Russia when the Cossacks raid the country. Grandma Bubba tries to convince Grisha, her grandson, to leave behind an old coat that might prevent him from being accepted at Ellis Island upon the family's arrival in America. Grisha refuses since the coat is lined with wool from the coat of his deceased mother. The family begins their transatlantic journey, but when they arrive at Ellis Island, Grisha is threatened with deportation until his cousin Rachel comes up with a plan to save him. Woodruff's historical detail is based on research she discovered at the Ellis Island museum.A fine introduction to European immigration for young readers ages four to eight. A moving example of familial love.
The bestselling author of GEORGE WASHINGTON'S SOCKS and THE RAVENMASTER'S SECRET, Woodruff has written more than twenty books for children, including picture books, historical fiction, and lighthearted fantasy. Her numerous school visits each year are popular with kids and teachers. The sequel to GEORGE WASHINGTON'S SOCKS, GEORGE WASHINGTON'S SPY, will be published in November 2010. She lives with her family in Martin's Creek, Pennsylvania.