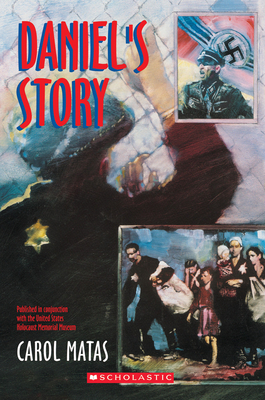 
Not On Our Shelves—Ships in 1-5 Days
Daniel barely remembers leading a normal life before the Nazis came to power in 1933. He can still picture once being happy and safe, but memories of those days are fading as he and his family face the dangers threatening Jews in Hitler's Germany in the late 1930's. No longer able to practice their religion, vote, own property, or even work, Daniel's family is forced from their home in Frankfurt and sent on a long and dangerous journey, first to the Lodz ghetto in Poland, and then to Auschwitz -, the Nazi death camp. Though many around him lose hope in the face of such terror, Daniel, supported by his courageous family, struggles for survival. He finds hope, life and even love in the midst of despair.

CAROL MATAS is an internationally acclaimed author of more than 45 books for children and young adults. Her best-selling work has been translated into sixteen languages and has received over 100 awards and honors including the Sydney Taylor Award, the Geoffrey Bilson Award, the Silver Birch Award, and Canadian Jewish Book Award. She has twice been nominated for the Governor General’s Award for Children’s Literature. She lives in Winnipeg, Manitoba.

“We are alive. We are human, with good and bad in us. That's all we know for sure. We can't create a new species or a new world. That's been done. Now we have to live within those boundaries . What are our choices? We can despair and curse, and change nothing. We can choose evil like our enemies have done and create a world based on hate. Or we can try to make things better.”― Carol Matas, Daniel's Story