Boy Gets Girl: A Play (Paperback) 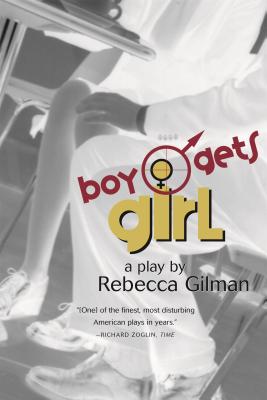 Boy Gets Girl: A Play (Paperback)

What is a stalker? And what kind of life can a woman lead when she knows she is being followed, obsessively and perhaps dangerously, by one?

This is the dilemma facing Theresa Bedell, a reporter in New York, in Rebecca Gilman's tensely fascinating new play. When Theresa goes on an awkward blind date with a friend of a friend, she sees no reason to continue the relationship--but the man, an attractive fellow named Tony, thinks otherwise. While Theresa is at first annoyed yet flattered by his continuing attention, her attitude gradually changes to one of fear and fury when he starts violently to menace her and those around her.

In brilliantly delineating the kind of terror a woman in full control of her life feels when everything around her suddenly seems to be a threat, Gilman probes the dark side of relationships in the 1990s with the rich insight and compelling characterizations that have distinguished her earlier plays and made her one of the most exciting young playwrights working today.

Rebecca Gilman is the author of the play The Glory of Living, which received the 1998 American Theater Critics Association's Osborn Award. She is the recipient of the Roger L. Stevens Award from the Kennedy Center Fund for New American Plays, the George Devine Award, the Evening Standard Award for Most Promising Playwright, the Scott McPherson Award, and an Illinois Arts Council playwriting fellowship. A native of Alabama, Ms. Gilman lives in Chicago, Illinois.

“One of the finest, most disturbing American plays in years.” —Richard Zoglin, Time

“[A] provocative, unsettling play, further proof of Gilman's ability to shake up a theater audience with the power of her ideas--and words.” —Richard Christiansen, Chicago Tribune