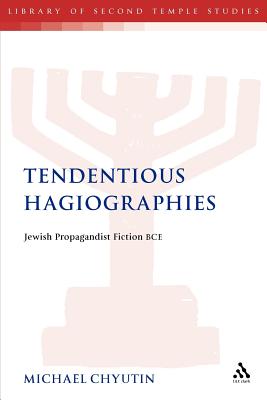 This is book number 77 in the Library of Second Temple Studies series.

Tendentious Historiographies surveys ten Jewish literary works composed in Hebrew, Aramaic, or Greek between the 8th and the mid-2nd century BCE, and shows that each deals with major problems of the Jewish populations in the Land of Israel or in the dispersions. Michael Chyutin provides insightful and at times surprising explorations of the purpose behind these texts.

Jonah is viewed as a grotesque, a parody of prophetic writing. Ahiqar preaches the breaking of religious, national and familial frameworks and supports assimilation into the local society. Esther calls for Jewish national and familial solidarity and recommends concealment of religious identity. Daniel preaches individual observance of the religious precepts. Susannah also advocates national and religious solidarity. Tobit tells the story of the founders of the sect of the Therapeutes. Ruth supports the Jews who did not go into exile in Babylon. The play Exagoge and the romance Joseph and Aseneth support the Oniad temple in Egypt. Finally, Judith supports the moderate approach of the Jerusalem priests against the Hasmoneans' demand for violent struggle.
Michael Chyutin obtained his PhD at the Technion Institute in Haifa and lives in Givataim, Israel.