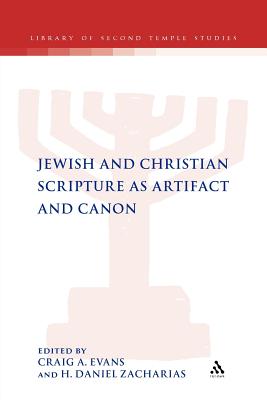 
Not On Our Shelves—Ships in 1-5 Days
(This book cannot be returned.)
Jewish and Christian Scripture as Artifact and Canon constitutes a collection of studies that reflect and contribute to the growing scholarly interest in manuscripts as artifacts and witnesses to early stages in Jewish and Christian understanding of sacred scripture. Scholars and textual critics have in recent years rightly recognized the contribution that ancient manuscripts make to our understanding of the development of canon in its broadest and most inclusive sense. The studies included in this volume shed significant light on the most important questions touching the emergence of canon consciousness and written communication in the early centuries of the Christian church. The concern here is not in recovering a theoretical "original text" or early "recognized canon," but in analysis of and appreciation for texts as they actually circulated and were preserved through time. Some of the essays in this collection explore the interface between canon as theological concept, on the one hand, and canon as reflected in the physical/artifactual evidence, on the other. Other essays explore what the artifacts tell us about life and belief in early communities of faith. Still other studies investigate the visual dimension and artistic expressions of faith, including theology and biblical interpretation communicated through the medium of art and icon in manuscripts. The volume also includes scientific studies concerned with the physical properties of particular manuscripts. These studies will stimulate new discussion in this important area of research and will point students and scholars in new directions for future work.
Craig A. Evans (Ph.D., Claremont) is Payzant Distinguished Professor of New Testament, Acadia Divinity College Wolfville, Nova Scotia, Canada.H. Daniel Zacharias is a Lecturer at Acadia Divinity College, Nova Scotia, Canada.