The Unlikely Hero of Room 13B (Paperback) 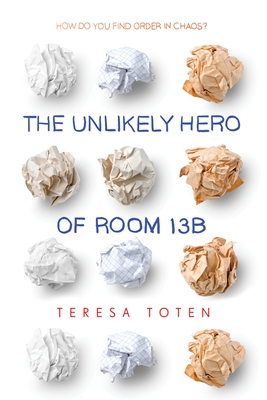 The Unlikely Hero of Room 13B (Paperback)

Filled with moments of deep emotion and unexpected humor, this understated and wise novel explores the complexities of living with OCD and offers the prospect of hope, happiness and healing. Perfect for readers who love Eleanor & Park and All the Bright Places.

The instant Adam Spencer Ross meets Robyn Plummer in his Young Adult OCD Support Group, he is hopelessly, desperately drawn to her. Robyn has an hypnotic voice, blue eyes the shade of an angry sky, and ravishing beauty that makes Adam’s insides ache. She’s also just been released from a residential psychiatric program—the kind for the worst, most difficult-to-cure cases; the kind that Adam and his fellow support group members will do anything to avoid joining.

Adam immediately knows that he has to save Robyn, must save Robyn, or die trying. But is it really Robyn who needs rescuing? And is it possible to have a normal relationship when your life is anything but?

Select praise for The Unlikely Hero of Room 13B:

“. . . achingly authentic. Like Augustus Waters before him, Adam Spencer Ross will renew your faith in real-life superheroes and shatter your heart in equal measures.” —Kirkus Reviews, Starred

“This book made me laugh, cry, think, and kept me coming back for more.” —The Guardian

“Adam is a protagonist that readers will root for.” —VOYA

“Honest, fresh, and funny . . . Toten employs information about OCD like grace notes in this deft and compelling narrative.” —Booklist

“Adam is a fresh and complex character, and far more than the sum of his symptoms.” —Publishers Weekly

TERESA TOTEN won the ALA Schneider Family Book Award and Canada's Governor General's Literary Award for The Unlikely Hero of Room 13B. She is also the author of the acclaimed Blondes series, as well as The Game, The Onlyhouse, and, with Eric Walters, The Taming. Her upcoming novel, Beware That Girl, is a psychological thriller (Delacorte Press/May 2016). Teresa Toten lives in Toronto.

"Hazel and Augustus need to move over because Batman and Robyn are about to take their place in the annals of YA literary romantic couples. A definite next read for teens who loved John Green's The Fault in Our Stars and Cammie McGovern's Say What You Will."—School Library Journal, STARRED REVIEW

"Toten never plays coy with [Adam's] and others' illness, but she also shows Adam as someone straining toward normal and sometimes achieveing it. His plight is sure to inspire compassion in readers."—The Bulletin of the Center for Children's Books