Lights Out: A Cyberattack, A Nation Unprepared, Surviving the Aftermath (Paperback) 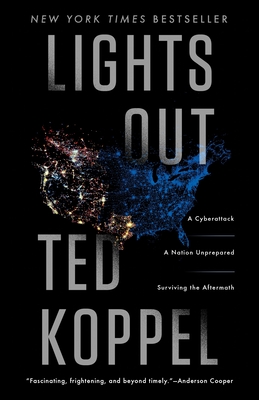 Lights Out: A Cyberattack, A Nation Unprepared, Surviving the Aftermath (Paperback)


Not On Our Shelves—Ships in 1-5 Days
NEW YORK TIMES BESTSELLER • Ted Koppel reveals that a major cyberattack on America’s power grid is not only possible but likely, that it would be devastating, and that the United States is shockingly unprepared.

“Fascinating, frightening, and beyond timely.”—Anderson Cooper

Imagine a blackout lasting not days, but weeks or months. Tens of millions of people over several states are affected. For those without access to a generator, there is no running water, no sewage, no refrigeration or light. Food and medical supplies are dwindling. Devices we rely on have gone dark. Banks no longer function, looting is widespread, and law and order are being tested as never before.

It isn’t just a scenario. A well-designed attack on just one of the nation’s three electric power grids could cripple much of our infrastructure—and in the age of cyberwarfare, a laptop has become the only necessary weapon. Several nations hostile to the United States could launch such an assault at any time. In fact, as a former chief scientist of the NSA reveals, China and Russia have already penetrated the grid. And a cybersecurity advisor to President Obama believes that independent actors—from “hacktivists” to terrorists—have the capability as well. “It’s not a question of if,” says Centcom Commander General Lloyd Austin, “it’s a question of when.”

And yet, as Koppel makes clear, the federal government, while well prepared for natural disasters, has no plan for the aftermath of an attack on the power grid.  The current Secretary of Homeland Security suggests keeping a battery-powered radio.

In the absence of a government plan, some individuals and communities have taken matters into their own hands. Among the nation’s estimated three million “preppers,” we meet one whose doomsday retreat includes a newly excavated three-acre lake, stocked with fish, and a Wyoming homesteader so self-sufficient that he crafted the thousands of adobe bricks in his house by hand. We also see the unrivaled disaster preparedness of the Mormon church, with its enormous storehouses, high-tech dairies, orchards, and proprietary trucking company—the fruits of a long tradition of anticipating the worst. But how, Koppel asks, will ordinary civilians survive?

With urgency and authority, one of our most renowned journalists examines a threat unique to our time and evaluates potential ways to prepare for a catastrophe that is all but inevitable.
TED KOPPEL, a 42-year veteran of ABC News, was anchor and managing editor of Nightline from 1980 to 2005. New York University recently named Koppel one of the top 100 American journalists of the past 100 years. He has won every significant television award, including 8 George Foster Peabody Awards, 11 Overseas Press Club Awards (one more than the previous record holder, Edward R. Murrow), 12 duPont-Columbia Awards and 42 Emmys. Since 2005 he has served as managing editor of the Discovery Channel, as a news analyst for BBC America, as a special correspondent for Rock Center, and continues to function as commentator and non-fiction book critic at NPR. He has been a contributing columnist to the New York Times, the Washington Post, and the Wall Street Journal and is the author the New York Times bestseller Off Camera.
"[Koppel's] suggestion that the United States look back to the era of mass civil defense as a model for how we might start to make preparations is provocative and sobering at the same time."
-The New York Times Book Review

“Ted Koppel has set off a firestorm with his explosive new book….A devastating cyberattack on our powergrid [is]…the risk Koppel has brought to the attention of the American public.”
-The Energy Times

"Lights Out is a timely warning about the vulnerability of America to a massive cyberattack that would cripple all we take for granted – electricity, communication, transportation. This is not science fiction. Hats off to Ted Koppel for putting us all on alert."
–TOM BROKAW

"Without a single bullet, bomb, or missile, a foreign enemy can now launch a devastating attack on the United States. Koppel explores how cyberwarfare threatens all of us, assesses the risks, criticizes the lack of government action, and finds praise for the Mormon way of disaster preparedness. I hope he's wrong about the danger but fear he's right on the mark."
–ERIC SCHLOSSER, author of Command and Control and Fast Food Nation

"Ted Koppel's unparalleled reporting skills are on full display in Lights Out. A fascinating and frightening look at just how vulnerable we are to a cyberattack."
–ANDERSON COOPER

“As readers would expect from Ted Koppel, Lights Out is dramatic but not hyped, tied to today’s news of shaky infrastructure and cyber attacks but also forward looking. This is an engrossing and significant book.”
—JAMES FALLOWS, national correspondent, The Atlantic; author of China Airborne

“In Lights Out, Ted Koppel uses his profound journalistic talents to raise pressing questions about our nation’s aging electrical grid. Through interview after interview with leading experts, Koppel paints a compelling picture of the impact cyberattacks may have on the grid. The book reveals the vulnerability of perhaps the most critical of all the infrastructures of our modern society: the electricity that keeps our modern society humming along.”
—MARC GOODMAN, author of Future Crimes

"Ted Koppel has written an important wake-up call for America on the threat of a crippling cyberattack. The danger we face right now is great, but so is the failure to acknowledge that the threat exists at all."
–LEON PANETTA, former U.S. Secretary of Defense

"Lights Out illuminates one of the greatest vulnerabilities to our nation – a cyberattack on our power grid. It is a wake-up call for all of us. We are the nation that created the internet; we should be the first to secure it. This powerful book could be the catalyst for just such a change."
–GENERAL (RET.) KEITH ALEXANDER, former director of the National Security Agency

"Try to imagine what a malevolent government, armed with the latest computer sophistication, could do to another nation's complex and entirely digital-dependent economy and social infrastructure. Fortunately, Ted Koppel has imagined it for us. We have been warned."
–GEORGE F. WILL

"When the lights go out after the cyberattack, this is the book everyone will read."
–RICHARD A. CLARKE, author of Cyber War and former National Coordinator for Security, Infrastructure Protection, and Counter-terrorism

“A bold enumeration of the challenges posed by the digital age; an appeal to safeguard new instruments of human flourishing by studying the ways in which they could be exploited.”
—HENRY A. KISSINGER