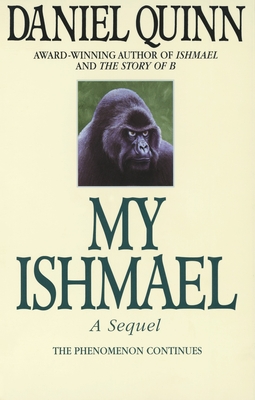 This is book number 3 in the Ishmael Series series.

An extraordinary and startlingly original sequel to Ishmael

“Enthralling, shocking, hope-filled, and utterly fearless, Daniel Quinn leads us deeper and deeper into the human heart, history, and spirit. In My Ishmael, Quinn strikes out into entirely new territory, posing questions that will rock you on your heels, and providing tantalizing possibilities for a truly new world vision.”—Susan Chernak McElroy, author of Animals as Teachers & Healers

When Ishmael places an advertisement for pupils with “an earnest desire to save the world,” he does not expect a child to answer him.  But twelve-year-old Julie Gerchak is undaunted by Ishmael’s reluctance to teach someone so young, and convinces him to take her on as his next student.  Ishmael knows he can't apply the same strategies with Julie that he used with his first pupil, Alan Lomax—nor can he hope for the same outcome. But young Julie proves that she is ready to forge her own spiritual path and arrive at her own destination.  And when the time comes to choose a pupil to carry out his greatest mission yet, Ishmael makes a daring decision—a choice that just might change the world.

Explore Daniel Quinn’s spiritual Ishmael trilogy:
ISHMAEL • MY ISHMAEL • THE STORY OF B
Daniel Quinn grew up in Omaha, Nebraska, and studied at St. Louis University, the University of Vienna, and Loyola University of Chicago. He worked in Chicago-area publishing for twenty years before beginning work on the book for which he is best known, Ishmael. In 1991, this book was chosen from among some 2,500 international entrants in the Turner Tomorrow competition to win the half-million dollar prize for a novel offering “creative and positive solutions to global problems.” It has subsequently sold more than a million copies in English, is available in some thirty languages, and has been used in high schools and colleges worldwide in courses as varied as philosophy, geography, ecology, archaeology, history, biology, zoology, anthropology, political science, economics, and sociology. Subsequent works include Providence, The Story of B, My Ishmael: A Sequel, Beyond Civilization, After Dachau, The Holy, At Woomeroo, The Invisibility of Success, and The Teachings. Daniel Quinn died in 2018.
"Enthralling, shocking, hope-filled, and utterly fearless, Quinn leads us deeper and deeper into the human heart, history, and spirit.  Thank God the gorilla is back! In My Ishmael, Quinn strikes out into entirely new territory, posing questions that will rock you on your heels, and providing tantalizing possibilities for a truly new world vision."
--Susan Chernak McElroy, author of Animals as Teachers & Healers

"Irresistible...[Quinn's] ideas are as thought-provoking as ever."
--Kirkus Reviews