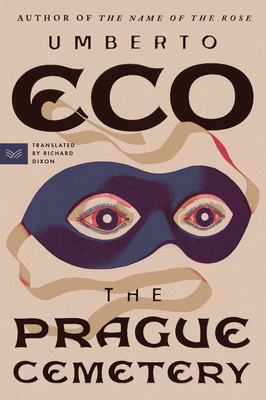 “In Eco's latest work, we follow the exploits of a split-personality secret agent and forger who traipses around 19th-century Europe involving himself in many of the key events of the day. From Garibaldi's campaign for a united Italian Republic to the Paris Commune to the Dreyfus Affair, he plants bombs, attends black masses, and forges documents playing one conspiracy against another. As always, Eco spins this all into a riveting and engrossing tale.”
— Conrad Silverberg, Boswell Book Company, Milwaukee, WI

The Prague Cemetery is the #1 international bestseller from the award-winning and New York Times best-selling author of The Name of the Rose, Umberto Eco.

“Vintage Eco...the book is a triumph.”—New York Review of Books

Nineteenth-century Europe—from Turin to Prague to Paris—abounds with the ghastly and the mysterious. Jesuits plot against Freemasons. Italian republicans strangle priests with their own intestines. French criminals plan bombings by day and celebrate Black Masses at night.

Every nation has its own secret service, perpetrating forgeries, plots, and massacres. Conspiracies rule history. From the unification of Italy to the Paris Commune to the Dreyfus Affair to The Protocols of the Elders of Zion, Europe is in tumult and everyone needs a scapegoat.

But what if behind all of these conspiracies, both real and imagined, lay one lone man?

“Choreographed by a truth that is itself so strange a novelist need hardly expand on it to produce a wondrous tale...Eco is to be applauded for bringing this stranger-than-fiction truth vividly to life.”—New York Times
UMBERTO ECO (1932–2016) was the author of numerous essay collections and seven novels, including The Name of the Rose,The Prague Cemetery, and Inventing the Enemy. He received Italy’s highest literary award, the Premio Strega, was named a Chevalier de la Légion d’Honneur by the French government, and was an honorary member of the American Academy of Arts and Letters.

"[Eco's] latest takes that longtime thriller darling, the conspiracy theory, and turns it into something grander...Sold to 40 countries and said to be controversial; a speed-read with smarts." -- Library Journal, Pre-Pub Alert, "My Picks" "A whirlwind tour of conspiracy and political intrigue...this dark tale is delightfully embellished with sophisticated and playful commentary on, among other things, Freud, metafiction, and the challenges of historiography." -- Booklist "Intriguing, hilarious....a tale by a master." -- Publishers Weekly boxed review "He's got a humdinger in this new high-level whodunit...a perplexing, multilayered, attention-holding mystery." -- Kirkus, starred "I find this book fascinating, perhaps the best Eco has written in years. Eco takes on conspiracy theories in the feverish political activism of nineteenth-century Europe--freemasonry, the Italian Risorgimento, the Paris Commune, and above all the forgery of the slanderous The Protocols of the Elders of Zion. What if there were a single mastermind behind all these conspiracies? It's already a bestseller in Italy, and I can't get enough of it!" -- Huffington Post "The Prague Cemetery is vintage Eco….Eco, the star bookworm of our times, has used his genius for excavating libraries to construct a semifictional narrative of how The Protocols might have evolved….The Prague Cemetery is at once entertainment, education, and warning. As usual, Eco has enjoyed himself. The narrative is vivid, shocking, sometimes baffling. It’s loaded ….with learned Eco disquisitions on bomb-making, the Paris sewers, the history of the Commune, the taxonomical distinctions between ladies on the game (grisettes, cocottes, biches, lorettes, and courtesans), early theories of brain function, and so forth. But as a genealogy showing how The Protocols evolved from the nightmares bequeathed to Europe by medieval heresy-hunting (the subject of The Name of the Rose), the book is a triumph." -- New York Review of Books —