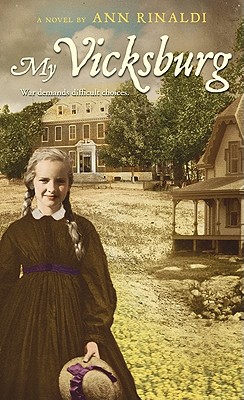 Claire Louise Corbett and her Confederate family flee their home as Union soldiers shell their town of Vicksburg, Mississippi. They venture out from the safety of a cave only three times a day, when the Union army takes their meals at eight in the morning, noon, and eight at night. Although many of the townspeople suffer from a lack of food, the Corbetts receive extra rations from Claire Louise's brother, Landon, a doctor with the Union army. When Claire Louise discovers her brother tending to a Confederate soldier who is responsible for Robert E. Lee's "lost order" (causing the South to lose the Battle of Antietam), she is forced to make a difficult choice between family and friends.

Award-winning historical novelist Ann Rinaldi paints a story of family, courage, and secrets during the forty-seven-day siege of Vicksburg, a battle that has sometimes been ignored in history because it ended the same day as the Battle of Gettysburg.

ANN RINALDI is an award-winning author best known for bringing history vividly to life. A self-made writer and newspaper columnist for twenty-one years, Ms. Rinaldi attributes her interest in history to her son, who enlisted her to take part in historical reenactments up and down the East Coast. She lives with her husband in central New Jersey.

" . . . the family members are vividly portrayed individuals and their relationships are particularly well drawn. An epilogue, an author’s note, and a bibliography conclude this thoroughly researched and enjoyable historical novel."--Booklist
"Claire comes across as a strong-willed individual who is not afraid to think for herself. A good choice for fans of historical fiction, particularly the Civil War era."--School Library Journal —