Connectome: How the Brain's Wiring Makes Us Who We Are (Hardcover) 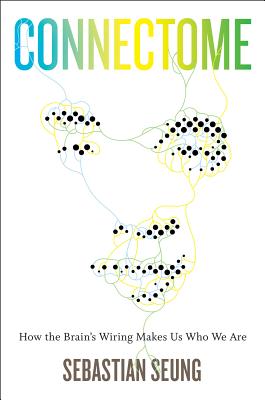 Connectome: How the Brain's Wiring Makes Us Who We Are (Hardcover)


Special Order—Subject to Availability
We know that each of us is unique, but science has struggled to pinpoint where, precisely, our uniqueness resides. Is it in our genes? The structure of our brains? Our genome may determine our eye color and even aspects of our personality. But our friendships, failures, and passions also shape who we are. The question is: how?Sebastian Seung, a dynamic professor at MIT, is on a quest to discover the biological basis of identity. He believes it lies in the pattern of connections between the brain’s neurons, which change slowly over time as we learn and grow. The connectome, as it’s called, is where our genetic inheritance intersects with our life experience. It’s where nature meets nurture.Seung introduces us to the dedicated researchers who are mapping the brain’s connections, neuron by neuron, synapse by synapse. It is a monumental undertaking—the scientific equivalent of climbing Mount Everest—but if they succeed, it could reveal the basis of personality, intelligence, memory, and perhaps even mental disorders. Many scientists speculate that people with anorexia, autism, and schizophrenia are "wired differently," but nobody knows for sure. The brain’s wiring has never been clearly seen.In sparklingly clear prose, Seung reveals the amazing technological advances that will soon help us map connectomes. He also examines the evidence that these maps will someday allow humans to "upload" their minds into computers, achieving a kind of immortality.Connectome is a mind-bending adventure story, told with great passion and authority. It presents a daring scientific and technological vision for at last understanding what makes us who we are. Welcome to the future of neuroscience.
Sebastian Seung is Professor of Computational Neuroscience at MIT and an Investigator of the Howard Hughes Medical Institute. He has made important advances in robotics, neuroscience, neuroeconomics, and statistical physics. His research has been published in leading scientific journals, and also featured in the New York Times, Technology Review, and the Economist.

“The best lay book on brain science I’ve ever read.”
— Wall Street Journal by Daniel Levitin, Professor, McGill University; author of This Is Your Brain on Music and The World in Six Songs.

“‎This is complicated stuff, and it is a testament to Dr. Seung’s remarkable clarity of exposition that the reader is swept along with his enthusiasm, as he moves from the basics of neuroscience out to the farthest regions of the hypothetical, sketching out a spectacularly illustrated giant map of the universe of man.”
— New York Times

“Seung argues intelligently and powerfully that the self lies in the totality of the brain’s wiring.”
— Nature by Christof Koch, Professor, California Institute of Technology; Chief Scientific Officer, Allen Institute for Brain Science; author of Quest for Consciousness and Consciousness: Confessions of a Romantic Reductionist

“With the first-person flavour of James Watson’s Double Helix—an account of how DNA’s structure was discovered—Connectome gives a sense of the excitement on the cutting edge of neuroscience.”
— NewScientist by Terry Sejnowski, Professor and Director, Computational Neurobiology Lab, Salk Institute; Investigator, Howard Hughes Medical Institute; Member, National Academy of Sciences and National Academy of Engineering USA.

“An elegant primer on what’s known about how the brain is organized and how it grows, wires its neurons, perceives its environment, modifies or repairs itself, and stores information. Seung is a clear, lively writer who chooses vivid examples.”
— Washington Post

“Sebastian Seung scales the heights of neuroscience and casts his brilliant eye around, describing the landscape of its past and boldly envisioning a future when we may understand our own brains and thus ourselves.”
—Kenneth Blum, Executive Director, Center for Brain Science, Harvard University

“Sebastian Seung can do it all. He’s widely recognized as a superb physicist, a whiz with computers, and a path-breaking neuroscientist. Connectome shows that he's also a terrific writer, as inspiring as he is clear and good humored.”
—Steven Strogatz, Cornell University, author of Sync: the Emerging Science of Spontaneous Order

“In Connectome, Sebastian Seung reminds us that the human brain has contemplated itself for centuries. This is an important book, full of refreshingly new science and engaging history, about the essential quest to understand ourselves.”
—Phillip A. Sharp, MIT, 1993 Nobel Prize in Physiology or Medicine

“A landmark work, gorgeously written. No other researcher has traveled as deeply into the brain forest and emerged to share its secrets.”
—David Eagleman, author of Incognito and Sum

“Connectomics is emerging as a crucial and exhilarating field of study. Sebastian Seung takes you by the hand and shows you why. Connectome is a page turner—a book that should be read by anyone who lays claim to be thinking about the nature of life.”
—Michael Gazzaniga, University of California at Santa Barbara and author of Human and The Ethical Brain